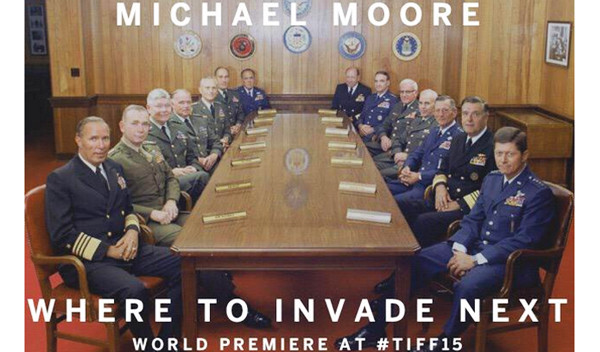 The MPAA gave Michael Moore’s “Where to Invade Next” an R rating today. Moore won’t accept. I don’t know why he should. That movie can be seen by anyone.

The ratings group cited Moore’s film “for language, some violent images, drug use and brief graphic nudity.” You could see more of any of that just by flipping through your TV. So here we go again.

In a statement Moore says:

“It’s amazing how 25 years have passed—we invented the internet, gay marriage is legal and we elected an African American President of the United States” said Moore “but the MPAA is still intent on censoring footage that is available from any evening network news show. This film has been widely praised by critics for it’s warmth and humor and optimism. What is the real reason I keep getting all these ‘R’ ratings. I wish the MPAA would just be honest and stick a label on my movies saying: ‘This movie contains dangerous ideas that the 99% may find upsetting and lead them to revolt. Teens will be the most agitated when they learn they will soon be $80,000 in debt just by going to school.”

Producers Tom Quinn and Jason Janego:
“With this rating, the MPAA is effectively telling high schoolers they just aren’t mature enough to handle or discuss important issues directly affecting their pursuit of the American dream. The notion that a teenager can’t walk into a theater and see WHERE TO INVADE NEXT is ridiculous and frankly un-American.”