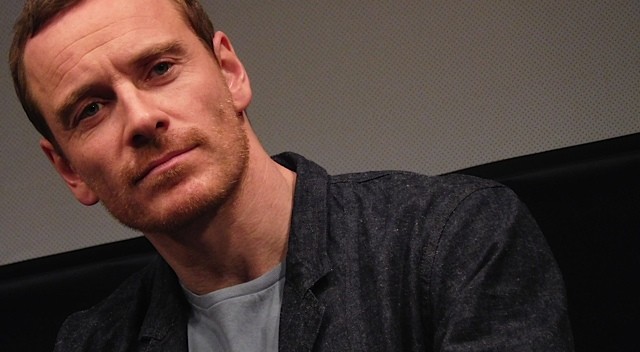 Anticipation by the press was so high, they started forming lines in the freezing cold three hours before the film began. (Fassbender photo c2015 Showbiz411 by Paula Schwartz)

Below are some highlighted quotes from the press conference:

Aaron Sorkin: “Before I knew what I wanted to do, I knew what I didn’t want to do and that was a biopic. That would be the conventional cradle to grave structure where you kind of land on all the greatest hits. It’s a structure that’s familiar to audiences and I didn’t think I would be able to shake it. I didn’t think I would be that good at. And what happened is I like claustrophobic spaces. I like compressed periods of time, a ticking clock. I like things that are behind the scenes, in this case literally behind the scenes, so I wondered if I could take all the work Walter had done, and if there was a way to dramatize the points of friction… and dramatize them in this way, with three, just three real time scenes, 30 minutes for the audience is the same for a character on screen. And I didn’t think there was a chance that the studio would let me do that, but they did.”

On the making of the film:

Kate Winslet: “It was so exciting. I have to be honest, it was terrifying. I do remember all of us walking into the room on day one of rehearsal just for a simple read-through. You’re trying out your accent and hoping to God that everyone else isn’t looking at you and thinking, ‘Oh, she’s shit.” And I remember Michael and I sort of greeting each other, and there was a hug that I almost remember as being a little bit like collapsing on one another…. Over to you Fassb.”

Fassbender: “Like, you can let go of me now. Stop hugging me!” (laughter).

Sorkin: “My favorite moment, at the very first table read. Each of them actually at at least at one point in the movie, there’s kind of a long list of things to say and Michael in one of his speeches where he’s saying that the 300 megahertz processor is twice the speed of the 200 Intel, this and that, just as he’s saying it and he glanced up at me and on a break I went over to Jeff and I said, ‘Listen, Michael’s a really big Irish guy and I think he’s going to beat me up.’ And Jeff, who had been doing this for three years already with ‘The Newsroom,’ just stared at me and said, ‘I’m a really big Irish guy and I’m …”

Michael Fassbender on his opinions of Steve Job and if his perception changed during filming:

“I didn’t know much about him. Obviously I knew who he was but I’m not very interested in technology. I use it pretty poorly so everything was new to me to be honest. I suppose the thing that really stuck with me was meeting people that knew him in his life. I got the opportunity to meet John Scully, Joanna, Woz, Hertzfeld, and the one thing that stuck with me was how much of an impression he made on these people, obviously when he was alive, but since he passed away, you could still see that he was very much present in their lives and even if relationships were difficult there was a sadness. There was a love there that I thought was pretty clear and that was something that stuck with me. Even though there’s all the stories about how he could a strong taskmaster – obviously the relationship with John Scully didn’t end well – I could really feel there was a love there for the man.”

Seth Rogen on playing Steve Wozniak and how concerned he was with emulating his real-life counterpart: “My job first and foremost was making my boss, Danny, happy. Woz wasn’t paying me; I was hired by these guys, and so they were the ones I needed to please and if that happened to me, if they were like, forget everything about Woz, disregard everything about him, it’s better for the movie. I would have been like that’s totally cool with me because I don’t want to get fired and Woz can’t fire me, so that was really my goal. I think at the end Woz was actually very happy which is nice and I’m happy that Woz doesn’t hate because that would terrible.”

Roger Friedman asks whether Michael Fassbender thought about what occurred in Jobs life after the point it’s portrayed in the film and how he would have played it until the end:

“ I did watch footage of him past the point we were filming. You know, I kind of lived with him for those months that we were filming. So it was like December from when I first got on board, until mid-April, when we finished. Every sort of day was about him so when we finished I kind of washed it all away to be honest. I was going out to another job and I just got stuck into that. But, yeah, I thought about so many things about the man, about what he achieved, what happened, when he got ill, how he would have dealt with that, and how he could have dealt with it, how part of his reality distortion field got in the way in the end when he was diagnosed, but that was the man that also changed all of our lives because he believed he could change the universe and he did, so all of the parts of the man are sort of intrinsic, one to the other.

But yeah I thought about him a lot and even the stuff that we weren’t filming about, you know, just to get a rounded idea and it just didn’t leave me because I was either reading the script or I was listening to Youtube clips of him, whether it be the speech he gave at Stanford or interviews from when he was in the next computer phase of his life, and all the speeches that he was giving, so he was kind of was in and around me the whole time so I was actually quite happy to put him aside when I finished to be quite honest.

Michael Fassbender on his likeness to Steve Jobs: “Obviously I don’t look anything like Steve Jobs… That was the first thing l said to Danny was like, ‘Well, you know, Christian Bale looks a lot more like Steve Jobs than me.’ …He said, ‘I’m not interested in that, you know? I just want to get the energy and the essence of the man and go with that.’ So from the beginning the approach was to just not try and emulate that look, or copy that look, and so basically the only thing I did was I put in brown contacts but as we were going on and for filming, I think it was midway through the second act… the head of the make up and hair she amazing got these all these back up plans. We had the grey wig for the end but we were never sure whether we were going to use that, or, which way to go, so I think it was midway through the second act Danny and I started talking, it was like, let’s get the black turtleneck and the jeans and the New Balance, I think the audience will want that, and the glasses, and this sort of iconic look, more iconic look, and that just sort of happened. It just sort of developed as the third act came along. It was very organic.”

Kate Winslet: “I remember you saying, it was some sometime during that period, I remember Michael saying to me, ‘I really feel like him now.”

Michael Fassbender: “It took that long (laughs). Just as we finished, the last day I was like, ‘Okay I get it now.’”