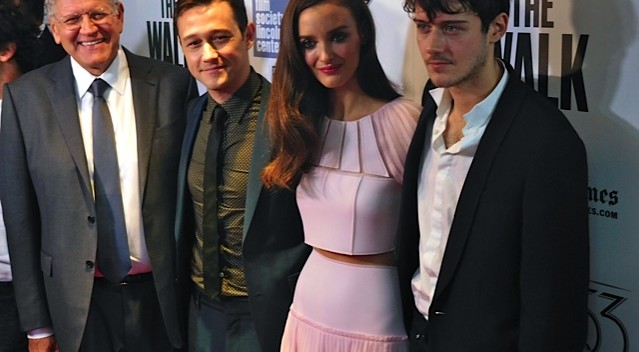 Robert Zemeckis’ 3-D magical and emotional spectacle, “The Walk,” starring Joseph Gordon-Levitt as high wire artist Philippe Petit, who walked more than 100 stories about the ground between the two towers of the World Trade Center on August 7, 1974, was a perfect choice to kick off the 53d New York Film Festival Saturday evening at Alice Tully Hall.

Actors Gordon-Levitt, Charlotte Le Bon, Cesar Domboy, Clement Sibony, James Badge Dale, Ben Schwartz and Steve Valentine, who Zemeckis called “his accomplices in the coup” as Petit called the people who helped him his historical feat, joined the director on stage during introductory remarks before the film’s first screening at 6 p.m.

“This has been a passion project for me for many, many years and everybody who’s on the stage stepped up to bring their passion to it and you can see on the screen when you finally see the film,” said Zemeckis from the podium. “I’m so proud to be able to be here tonight and present this extremely unique New York story here at the opening of the New York Film Festival.”

Mr. Zemeckis, the director behind technological marvels like “Flight” and “Back to the Future,” has magically recreated the towers and dares you to look down from some 100 stores above the ground. “I know I’ll never see anything like that again in my life,” says the cop to Petit before arresting him for his illegal daredevil stunt when Petit finally comes off the wire after some six crossing over 45 minutes. “The Walk” brings all this magically back to us from a time before people had cellphones to videotape and record everything.

Most of all “The Walk” is about art and optimism and the perseverance and resilience of New Yorkers. The cinematic re-creation of the towers is emotionally heart wrenching, but “The Walk” is ultimately an uplifting love letter to New York. During the final scene on the wire, Petit as portrayed by Gordon-Levitt, kneels on the wire and murmurs, “I salute first the wire, then the Towers, and then I salute the great city of New York.”

Earlier in the day at the press conference and screening of the film at the IMAX Theater at the AMC in Lincoln Square, Kent Jones, the moderator and the director of programming for the New York Film, asked the cast members and director if wire walking could be called an occupation or an art form?”

“I don’t know if there’s a real answer to that,” said Gordon- Levitt. “You could argue any of those categories but in my experience if you focus too much on labeling things that you probably aren’t paying attention to what’s really good about it.”

During the press conference the actors and director were perched on a little bridge that was suspended some distance from the floor. Ben Schwartz chimed in during the press conference about their location, “I’d like to say right behind us there’s like a 50 foot drop, which is hilarious for this type of movie where we’re on top of towers all the time. This is the most petrified I’ve been in my entire life!” while journalists laughed.

Later on a journalist asked about the scene where the cop tells Petit how awed he is by his feats. Could Petit’s walk in defiance of the law and very risky can still remain effective as a subversive piece of art when the cop patted him on the back? To the question of whether wire walking is an art form, Zemeckis replied, “I think the line that’s in the movie sort of sums up how I feel about it, which is ‘that all artists are anarchists in some way,’ some more extreme than others. It’s something that I think artists are supposed to do. They’re supposed to present you with a different angle on everything, and I certainly think it is and it’s as much an art form as poetry in my opinion.”

Gordon-Levitt responded to the part of the question about whether art can still be subversive if the cop patted Petit on the back. “And my answer is yes,” said the actor. “In fact, ideally what an artist can do is build a bridge and bring someone over and show them something and have them appreciate something they might not have appreciated before as opposed to go so far as to just keep the sides split, in which case you’re sort of just preaching to the choir so for me that’s the greatest success in subversive art is when someone who might not have appreciated (something) at first is won over.”

On the red carpet Christopher Browne, who co-wrote “The Walk” with Zemeckis and is now working on a science-fiction film with the director, told me the movie was very much a love story to New York. “I think because Philip Pettit was so obsessed and loved New York so much he couldn’t help but bring that out. We knew if we wanted to make this movie we wanted people to embrace the positive aspects of the movie,” he said. “It’s not about the tragedy of the towers. It’s about the life of the towers. They were living breathing entities. And someone like Philippe, from a totally different country, saw the beauty in them and was willing to risk his life to connect them with his wire.”

Browne told me he consulted with Petit over the script and that the action of the movie is very close to how it occurred in real life. “The only factual difference is he crossed eight times and in the movie he crosses six times. He was up there for 45 minutes. We couldn’t put the whole thing (up there). But otherwise his thoughts, the poses he does, the almost ballet moves he does were absolutely based on Philippe’s detailed notes and his book.”

The co-writer added that Gordon-Levitt spent eight days with Petit to learn how to juggle, unicycle and walk on the wire. “He also learned little tricks that I don’t even know, about what to eat on the morning of a walk and things like that.”

On the red carpet Gordon-Levitt, who had said earlier in the day that he visited the World Trade Center in 2001 in the summer before he began his studies at Columbia, that he recalled being on the towers “felt more like being in the sky than it felt like being in a tall building.”

As for the emotional import of the film, Gordon-Levitt, who will portray another real-life character in the Oliver Stone film “Snowden,” told me, “The movie is very much a love letter to these two towers and of course we all think of the tragedy of the World Trade Center Towers but with any tragic loss it’s important to remember the good times as well and celebrate that and have that catharsis, that positivity.”

As for the real-life man of “The Walk,” Philippe Petit told me he was very happy with the film and trained Gordon-Levitt how to wire walk. But as for whether the actor was ready for the real thing, anything as ambitious as life defying trips across high buildings, Petit told me, “Certainly not, but he did it for the movie.”

The glamorous after party for “The Walk” took place at Tavern of the Green and the cast members and director partied until nearly 2 a.m.