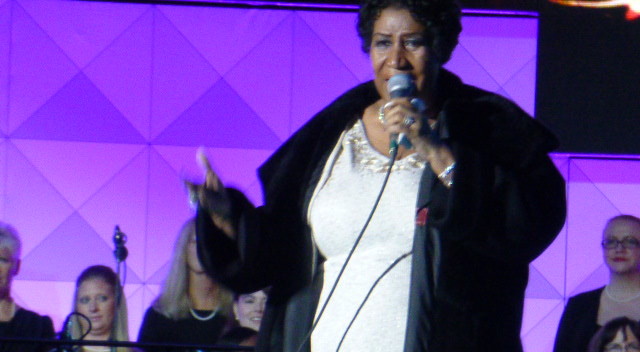 Want to see a picture of a happy face? That would be Pope Francis listening to Aretha Franklin singing “Amazing Grace” last night in Philadelphia. The Pope sat forward in his chair and radiated a beatific smile while Aretha dug deep and performed her own version of the famed gospel song, giving it new soul and warmth. It was magic moment. 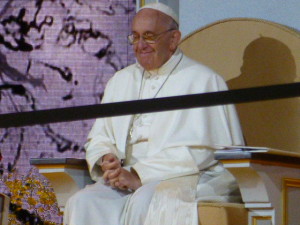 A second magical moment came at the end of the show, after the Pope left, when Franklin was performing “Nessum Dorma” with the Philadelphia Symphony Orchestra. Unfortunately, the concert organizers were so dis-organized that the Pope not only missed this, but he also missed a little boy who’d been singing in the choir run up and throw his arms around Aretha while she performed Puccini.

“I thought, first, Who is this? And then, oh my. he really was moved,” Aretha told me of the little boy at the dinner thrown for her later at the Rittenhouse Hotel. Reverend Jesse Jackson and author Michael Dyson were among the guests, as well as family members, band members and Aretha’s pianist Richard Gibbs.

Franklin was disappointed that the concert organizers didn’t put her numbers back to back. But she was still overcome at meeting the Pope. She gave him a set of sermons by her late father, the famous Reverend C.L. Franklin. Rev. Jackson gave Pope Francis a book about Martin Luther King. As Aretha and her father were frequent hosts of Dr. King, and marched with him, she and Jackson were mightily impressed by Pope Francis including Dr. King in his speeches.

At dinner, Jesse Jackson– whose mother passed away last week at age 93– gave a stirring tribute to Aretha as a crusader as well as a singer. He recalled that at the height of the civil rights movement it was “hard to raise money” for Dr. King. “Aretha and Harry Belafonte went on an 11 city tour, for free, to get us funds. It was at the height of her popularity–“I Never Loved a Man” was on the top of the charts–but she did it.”

Aretha recalled how Dr. King used to come down for breakfast. Her father’s cook couldn’t pronounce the word ‘sausage.’ But when she mispronounced it, Dr. King would simply say that’s what he wanted, so as not to embarrass her. “He was that way,” she said.

What a night in Philadelphia! For one thing, the city was totally shut down, no cabs, no transportation, chaos for drivers. The people down there are very nice, but they over-reacted to the Pope’s visit. Nevertheless, I have never seen friendlier or more polite National Guardsmen or police. It was like they all took happy pills.

I ran into Mark Wahlberg at the Rittenhouse. He was dressed in jeans and a T shirt, but changed backstage into a suit. He was with his famous manager, Eric Weissman, the real “E.” On stage, Wahlberg make a joke about the movie “Ted” and invoked “Go Eagles.” But he was a patient emcee considering he had little stage direction as many people came and went. Among them: The Fray, Andrea Bocelli, choirs, Jackie Evancho and comedian Jim Gaffigan. There were also a dozen or speakers, mostly in foreign languages, delivering messages to the Pope. During his breaks, I assure you, Wahlberg was studying notes and a run down. This was no easy task.

Wahlberg, a seemingly happy married father, was glowing. He said, “I attribute all of my success to my Christian faith.” And he meant it.

Pope Francis was simply disarming and incredibly charismatic. He knew his audience– a group called the World Family Conference. He said, “The family is like a factory of hope.” He talked about grandparents, which made everyone well up with tears.

At the end, as if he were in a small church somewhere, he asked, “What time is mass tomorrow?” He looked tired.

As we left the backstage area of the Oval, the most beautiful fireworks suddenly launched behind the Museum of Fine Arts. All of us, Aretha, all the performers, looked up and marveled at the colors. The lights reflected on the glass skin of an office building across the way. A perfect ending.