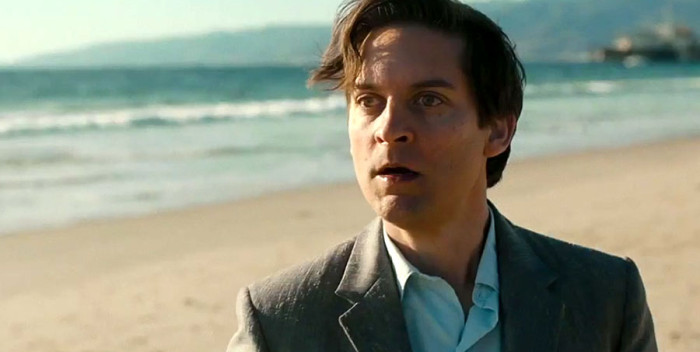 Where has Tobey Maguire been? AWOL from films mostly, playing in high stakes Hollywood poker games and getting into a bit of trouble. He hasn’t starred in a hit movie since 2007’s “Spider Man 3.” All that is about to change.

Zwick assembled an impressive cast. He told me at last week’s premiere: “I made sure to put together some of the best actors out there.”

Zwick more than adeptly pulls it off, with the story of Brooklyn born Fischer, his rise to world rock star status and his impending, tragic fall.

Tobey is married to the lovely Jennifer Meyer, daughter of Universal Pictures chief Ron Meyer. Meyer made an appearance at the screening, as did Tobey’s BFF’s Leo DiCaprio (hanging in the back row with a baseball cap on) and “Entourage” star Kevin Connolly, who told me he’s excited to direct the long awaited John Gotti flick with John Travolta.  “It will be a wild ride,” Kevin told me. That’s an understatement considering the movie’s background.

Sarsgaard told me: “I’ve always been a chess geek. I was playing it on my phone in the car here. Bobby Fischer’s  story is really sad. He became homeless, with his already existing paranoia worsening. He still thought everything was a conspiracy. When 9/11 happened, he called into a radio station and blamed the US. He became a huge embarrassment, and kept breaking the law. He finally landed in Iceland where they gave him asylum and he died there, broke, in 2008.”

Maguire did his homework as well saying, “I’ve been wanting to do this for about ten years. I watched everything I could get my hands on and talked to so many people who knew him. I wanted to get it right.”