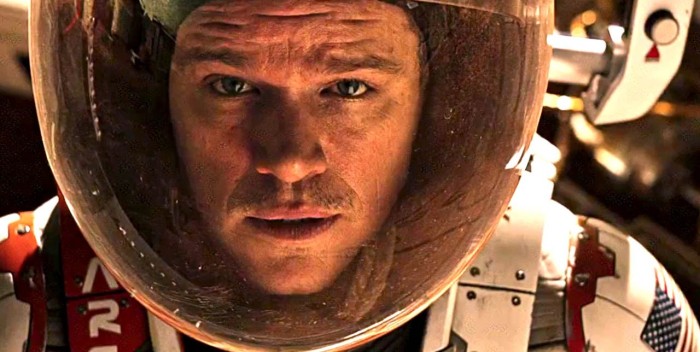 Ridley Scott’s made one of his very best movies with “The Martian,” starring Matt Damon, Jessica Chastain, and Chiwetel Ejiofor. The crowd went crazy for it last night at the Toronto film Festival premiere at Roy Thompson Hall. If Matt Damon doesn’t get an Oscar nomination I’ll be very surprised. He is all over this movie, and has never been better or more charming. Keep an eye on him because played right, Matt could finally score Best Actor some 20 years after co-winning Best Screenplay for “Good Will Hunting.”

“The Martian” is also the first ever 3D movie ever shown at the Toronto Film Festival. I’m told a new technology was installed at Roy Thompson Hall. It did look beautiful and the glasses were comfortable for a change!

Jessica Chastain shines as the commander of the space craft who elects to leave Damon’s Mark Watney, a botanist and astronaut behind on Mars. I don’t want to give too much away. But Jessica told me after the screening how proud she was that her character, Melissa Lewis, makes the hard decisions in space and is also quite the intergalactic daredevil.

Jessica, ever gracious, introduced me to Tracy Dyson, a NASA astronaut who consulted on the film and gave Jessica serious instruction. Tracy is 46. She looks about ten years younger– but she’s spent a total of 189 days in space. I realize now that’s why she looks so good! Anyway, Dyson told me she approves of “The Martian.” She had in her posse one of the builders of the real space station, and he also gave thumbs up to the station in the movie.

“The only thing we may have stretched,” said Jessica, “is the storms. I’ve been told Mars’s atmosphere is too thin for the kinds of storms we have.” Okay, fair enough. Otherwise this highly technical, science- heavy film is spot on.

“The Martian” could do “Jurassic World” type business. It’s that good. But it also hinges on Damon, who is alone for some time on Mars in a kind of “Home Alone” scenario. Even though the script has jokey moments, they are only to counter the heaviness of Damon’s predicament. That part is serious. And so are the set design and cinematography.

This is the third time Damon has been sent into space — “Elysium” and “Interstellar” were earlier and didn’t work as well. The third time’s a charm. He’s how (wait for it) My Favorite Martian.

More reviews midday Saturday from some other excellent films– “Our Brand Is Crisis,” “Youth,” and “Miss Sharon Jones.”