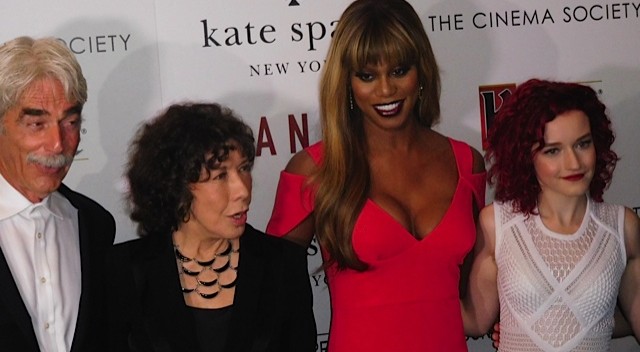 Big news: Sam Elliott and Ernie Hudson will play Jane Fonda and Lily Tomlin’s boyfriends on the second season of “Grace and Frankie.” Elliott, I told you a while ago, turned down the role that went to Craig T. Nelson in season 1. But then Elliott, having a Renaissance right now, starred with Lily in “Grandma,” opening this Friday. He met Fonda at the L.A. screening, and the rest is history. Hudson appeared in season 1, but Lily told our Paula Schwartz last night that he’s coming back.

Here’s Paula’s report from the NY “Grandma” premiere. Tomlin, as we’ve said before, is a shoo in for an Oscar nomination. Elliott is in the running. A terrific film.

“I’m very fortunate this year,” said the tall rangy 71 year-old actor, who is famous for that growly voice. And then there’s that bushy grey walrus mustache.
Elliott’s ten-minute turn in the Paul Weitz film has gotten him lots of attention as did his role playing Blythe Danner’s love interest in the dramedy,  “I’ll See You in My Dreams” released in the spring. In May, at the Critics’ Choice Television Awards in May, he was singled out as best guest performer in a drama series for his role on FX’s “Justified,” which just ended its run.
Usually typecast as a cowboy, this is not Elliott’s typical role. He plays a cuckolded ex-lover of Tomlin’s character, who has a painful reunion with him when she goes on a road trip to try to collect $630 for her granddaughter’s abortion, has already gotten Oscar buzz.
“It is a departure on some level,” he agreed of the role. “I don’t always get that opportunity to play, you know, sensitivity or rawness, which is kind of what this character was.”
His character goes through a variety of emotions as he uncovers reservoirs of anger and pain in a roller coaster of emotions all in the ten-minutes he’s on screen.
Elliott told me “the older he gets the more picky” he gets about roles. “People are going to get tired of you really quickly if you” keep repeating yourself.
He said he enjoyed doing independent films because everyone on set is interested in making a good movie and studios aren’t hanging over you. “It’s a lot more fun, very freeing, nobody’s doing it for the money.”
But back to his character of Karl in “Grandma,” who still seems in pain over the break up of his relationship with Tomlin’s character some 30 years earlier. “Well I think Karl is in pain,” said Elliott. “ I think you put your finger right on it. I mean, he’s obviously made a number of mistakes in his life, you know, as attested to by the fact that he’s got four ex wives and 11 children and x-amount of grandchildren and he’s there alone. He’s not married at the time and then here comes this woman from his past, and I think it’s a woman that he never got over. You know, that picture in the box of money, when he goes to get the money, and there’s a little photograph in there? It’s a picture of Lily.”
All those twists and turn of emotion in such a short time couldn’t all have been on the page I asked him. “It was all on the page in terms of the words,” Elliott said. “There wasn’t any ad-libbing. None. It’s just, you know, that’s what happens with good writing, the emotions rule at some point.” As for the roller coaster of emotions, “That’s life. Real life, it’s not linear, necessarily.”
What’s it like to be the go to sex symbol of postmenopausal women I asked him? “It’s incredible to still be at it, you know?”
So what’s he doing next?
“I don’t know,” he told me then laughed and corrected himself. “I do know. I’m so used to saying I don’t know what I’m gonna do next,” he laughed. “I’m doing an arc on ‘Grace and Frankie’ as Jane’s love interest, a guy from her past that comes back to her or back into her life.”
And previously announced, as unlikely as it seems, he will play Ashton Kutcher’s father in another Netflix project that Elliott called “the Untitled Ranch project.”
“It’s a three camera show, something that I’ve never done before. It’s a bit of a daunting challenge for me.”
Before getting dragged off by his publicist, I told the actor, most famous for his roles in “Tombstone” and “The Big Lebowski” that I was a fan of his wife’s work. His wife, of course, is Katharine Ross, who starred in “The Graduate.” They met on set and married ten years later. They’ve been together since 1970.
“I am too. I wish she was working,” he told me sadly. “She ought to be working. It’s one of the things about Hollywood, you know, it’s very hard on women. Not exactly a resurgence, but there’s been a number o films for older women, particularly this last year. I’m lucky that I was in a couple of them.”
Photo c 2015 Showbiz411.com by Paula Schwartz