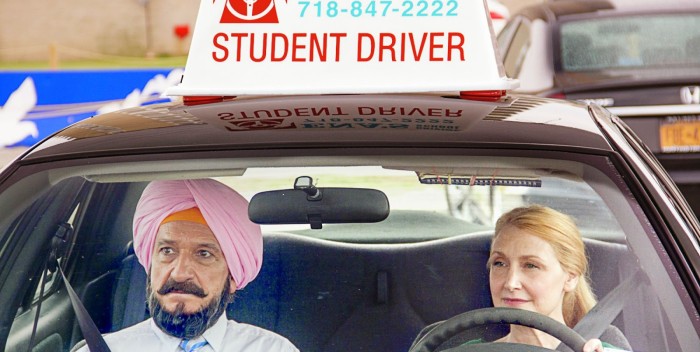 Sir Ben Kingsley plays a transplanted Sikh cabdriver in “Learning to Drive” so well that you’d think he’s Indian. And he did get an Oscar for playing “Gandhi.” Oh wait– Sir Ben is indeed half Indian, his father was an Indian doctor.

This came in handy when producers of this gem of a movie, which premiered last night, couldn’t get financing with a full Indian actor, the great Irffan Khan. (He’s only the star of “Jurassic World,” the year’s biggest movie.)

In came Kingsley to this unusual and wonderful film that features an Oscar worthy performance by Patricia Clarkson, as well as editing by Martin Scorsese Oscar winner Thelma Schoonmaker and a rare appearance by Matt Salinger, the actor son of the late JD Salinger. Also in the movie are Sarita Choudhury, Grace Gummer, and Jake Weber, all well cast.

And even though Kingsley is after all Sir Ben Kingsley, he’s so adept that he makes the whole thing look easy. It isn’t. His character, Darwan, is a cab driver at night and teaches drivers’ ed during the day. His new student is Wendy, famed book critic who owns a beautiful townhouse on West 98th St. The movie is based on a story by Katha Pollitt, and is more or less true. Sarah Kernochan, whose credits date back to 1986’s “Nine and 1/2 Weeks” (seems impossible but ok), fleshed out Pollitt’s story and amplified it.

Clarkson brings a humor and grace to Wendy that’s missing from modern cinema. She is just lovely, and makes Wendy’s arc a nuanced juxtaposition to Darwat’s changing life as an American citizen.

We get two really terrific indie films this weekend — “Learning to Drive” and “Grandma” with Lily Tomlin. No one can say “there’s nothing to see” anymore, that’s for sure. And for women’s roles, Clarkson and Tomlin can’t be beat.

Oh yes, all the trivia: director Isabelle Coixette coaxed Salinger out of retirement (he hadn’t acted in five years). She liked him so much she put him her next movie, as well.

And Thelma Schoonmaker– never ever works for anyone but Martin Scorsese. But when “Silence” was put off for a few months, she answered a request from Clarkson, who went to Scorsese and asked for the famed Oscar winning editor. The result is a master class in film editing. Nice, nice, work!