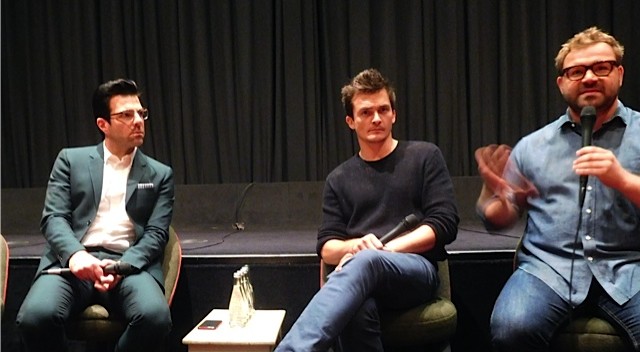 Zachary Quinto, one of the busiest and most versatile actors in movies today, has a bunch of high-profile projects coming out in the next year, including the action-packed, “Hitman: Agent 47,” based on the popular video game, which opens August 21. Quinto is best known for playing Spock in the “Star Trek” films and is now filming “Star Trek Beyond.” He plays lawyer Glenn Greenwald – who happens to be gay – in Oliver Stone’s upcoming “Snowden.” Last year he was critically acclaimed for his Broadway performance in “A Glass Menagerie.”

“Hitman: Agent 47” centers on an elite assassin, played by Rupert Friend (“Homeland), engineered to be the perfect killing machine and is known by the two digits on the barcode tattooed on the back of his neck. He’s in a life-and-death struggle with an enigmatic and powerful rival (Quinto) to prevent the creation of an army of killers from being unleashed on the world. Hannah Ware (“Boss”) plays a young woman who cannot remember her past but holds the key to defeating this plan.

Friday the trio of actors along with first-time feature film director Aleksander Bach turned up at the Crosby Street Hotel Friday to talk about “Hitman: Agent 47” with the press.

The first question came from Stephen Schaefer of the Boston Herald. He asked the three actors what their biggest challenge was in creating their roles. Then his question, directed at the affable and intelligent Quinto, got the press conference off to a rocky start.

Schaefer asked the actor, in light of his part as Greenwald in the Stone film, due out Christmas Day, and his part as James Franco’s lover in “I Am Michael,” if as “an out actor do you find that you are the go to guy for gay roles and in that sense do you see your assassin here as gay?”

“First question first, what was your biggest challenge?” repeated the publicist to the actors.

“Clearly you think it’s being gay,” cracked Quinto, causing the journalists to laugh.

(For the record, the bromance between Henry Cavill and Armie Hammer’s characters in “Man From U.N.C.L.E. has many more homoerotic tension than anything in “Hitman.”)

Quinto elaborated, “I don’t see the correlation. That’s a leap that I would never take. You know, I feel like the separation between who we are as actors and the characters we play, is what makes the whole thing interesting so you know that to me is an outdated mode of thinking, the one you just presented to me. I don’t really have an answer for you there.”

The actor added that just because the character he plays in the aforementioned two films is gay, and that he’s been a part of telling gay stories but that didn’t mean all of his characters were gay. “Weird question, my friend. But the biggest challenge I think in this film is the stamina, the action, keeping everything at the level that it needs to be at or staying there,” he said. “I think was a challenge we were all happy to me (a part of). It was good fun to come to work with these two.”

Rupert Friend then asked Schaefer, “Yeah, I mean, did you think that Hitman was gay?” The journalists laughed.

“I had no idea,” Schaefer replied. “You could say these two guys were having this homoerotic dance of death.” (Again laughter, some of it nervous twitters.)

“It’s a bizarre way of looking at it,” Quinto added.

When it was Ware’s turn to reply to the question of the biggest challenge of her role she hesitated, “Hem, yeah, sorry I’m a bit distracted. It was a physical role for all of us and that was fun and it really” stretches you as an actor. She went on to talk about the compelling characters they portray as well as the physicality of the role.

At that point Quinto, who couldn’t leave the question, asked Schaefer again what outlet he wrote for?

“I just realized I’m sorry I can’t move on from the fact that this,” Quinto said. “My friend, I really, actually find borderline offensive that you would sort of make this leap and ask that question” he said “as a journalist,” adding that that “sort of mode of thinking hindered people’s progress in the world of our industry so I think you have to be a little bit more mindful about how you talk to people and ask them questions.”

Schaefer, who also writes for the Advocate, elaborated, “There is this idea that some people think that it’s best or wonderful when gay actors can play gay roles whereas straight actors have always played gay roles and it is sort of uncharted territory to have a star who is an out actor” playing gay parents.

Replied Quinto, “But that’s a different question, that’s a different point that I could engage you on. But just to take the leap to ask me whether or not because I am gay, the character is gay, that’s where I find it’s offensive, so it’s good to move on from that, but I thought it was important to clarify that.”

Quinto’s graceful response defused a tense moment and displayed just how intelligent and sharp the actor is.