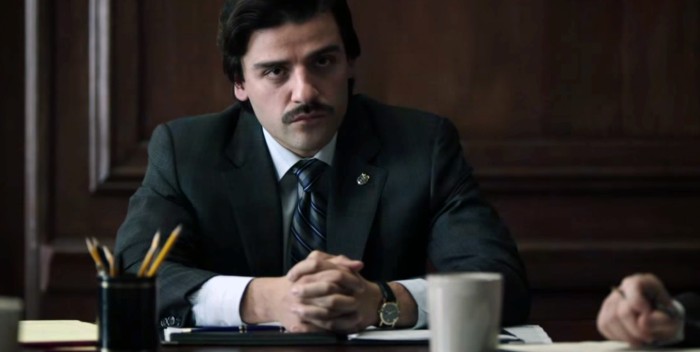 So, why the heck did HBO’s “Show Me a Hero” miss the Emmy cut off? Timing is everything! The Paul Haggis directed mini-series, written and produced by David Simon of “The Wire” fame, is the one reason to watch TV in August. The next awards it can be up for will be Golden Globes.

“Show Me a Hero” is like a great Sidney Lumet movie about politics and corruption in New York, with a heavy dose of Haggis, an expert at following different story threads to a conclusion.

Oscar Isaac, soon to play Han Solo’s kid in the new Star Wars and already a star from “Inside Llewyn Davis,” is Al Pacino-like riveting as real life Yonkers, New York mayor Nick Wasicsko who had to guide the city through a violent housing desegregation in the mid 1980s. Winona Ryder, who doesn’t work enough, makes a sensational comeback of sorts as a local councilwoman who stood up against the local Yonkers bigots who didn’t want blacks and low income families living in their neighborhoods.

The whole cast is top notch, with Bob Balaban, LaTanya Richardson, Alfred Molina, Jim Belushi, Catherine Keener, Peter Riegert, and Jon Bernthal among the standouts. The whole show is like a Who’s Who of the Best Actors Around as the tragic story of Wasicscko’s ride as the youngest mayor of a major city plays out.

Yonkers, if you don’t know, is a hidden big city directly north of New York’s City’s the Bronx in Westchester County and very much like that borough– except instead of the Yankees, it has a lot of inner city problems.

How hard was “Show Me a Hero” to make? When principal photography concluded, the show’s co-writer and executive producer, Simon’s long time partner, actually had a stroke. Simon joked, “He was back in time for post-production.”

And Oscar? Are you following this guy? His career is a straight trajectory up for the last 10 years. He’s got Star Wars and X Men coming up. I’m certain he will have his own Oscar before he turns 40. Nice guys finish first sometimes!