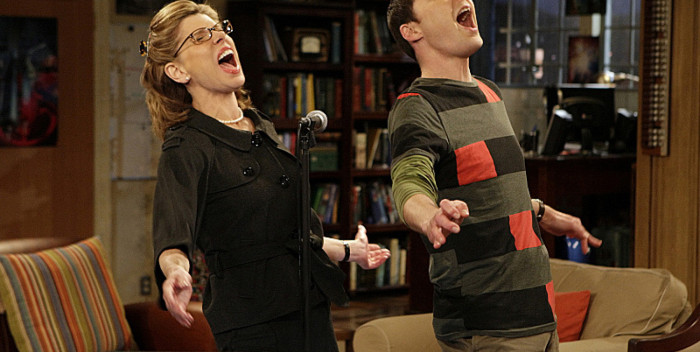 I usually don’t get into the whole Emmy voting fray. But hear me out on one of my all time faves, beloved New York based actress Christine Baranski. She’s nominated for two Emmy Awards this year. two! Emmy voters, I think she deserves at least one, don’t you?

Baranski is nominated for Best Supporting Actress in a Drama for “The Good Wife.” Her character, Diane Lockhart, is the linchpin of this underrated and so well executed popular series. Diane is a sleek and smart panther who prowls around “The Good Wife” ready to pounce, with a big heart when it’s needed. Baranski is simply a pleasure to watch. Her biggest competitors this year are Joanne Froggatt from “Downton Abbey” and Christina Hendricks in “Mad Men.” What a category!

If that weren’t enough, Baranski is also nominated again in comedy, for Best Female Guest Star in “The Big Bang Theory.” She recurs as Dr. Beverly Hofstadter, the uptight shrink mother of Leonard (Johnny Galecki). Her appearances are a treat. Watch this one:

Nominations in drama and comedy– very unusual. But Baranski is that way. I first saw her in Mike Nichols’ original production of “The Real Thing” on Broadway. Her career has covered everything from being Ethel to Cybill Shepherd’s Lucy (and stealing the show) in “Cybill” to knockout performances in movies like “Mamma Mia” and “Into the Woods.”

One of my favorite Baranski moments though is from “Reversal of Fortune,” when she played Klaus von Bulow’s lover Andrea Reynolds. It was unforgettable:

So let’s get with it, Emmy voters. Baranski is an acting treasure. And she’s just hitting her stride!