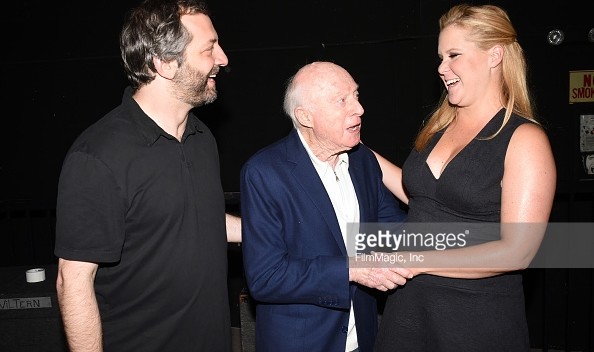 I think most people know actor Norman Lloyd from his run on “St. Elsewhere” as wise Dr. Auschlander, who ran the hospital. Lloyd’s credits begin with “The Streets of New York,” from 1939, the first ever drama filmed for television. He was part of Orson Welles and John Houseman’s Mercury Theater group.

So holy moley–Norman Lloyd has a nice recurring part in Judd Apatow’s “Trainwreck,” a smash comedy that opens Friday. This is the Amy Schumer movie in which the female comic plays a young woman who drinks heavily, smokes everything, sleeps with everyone– until she meets Bill Hader, playing a sports doctor. Amy’s dad, played by Colin Quinn, lives in an assisted living facility. His pal is played by Lloyd, the oldest actor working anywhere I would guess.

“Trainwreck” is just a beautifully crafted comedy, raunchy but with a big heart. It hits the sweet spot that movies like “Bridesmaids” and “While You Were Sleeping” every so often occupy. Apatow, whose work I always enjoy (I’m a fan of “This is 40”), takes elements and themes from all his films and TV work and brings them all together here. Think “Bridget Jones” with a lot of liquor and sex, and no repentance.

There are lots of cameos, too– great basketball players Lebron James and Amare Stoudamare, Chris Evert, Marv Albert, Matthew Broderick, and so on all show up at different times. Marisa Tomei and Daniel Radcliffe appear in a movie within the movie.

In addition to all of then, Oscar winner Tilda Swinton absolutely steals the movie as the British editor of a horrid New York based magazine that sort of combines fetishistic sex and cutting edge news. It’s called Snuff. Swinton is almost unrecognizable, with long hair and her face covered in bronzer, plus an accent she told me last night she based on a friend from Essex. She is just phenomenal. Forget the Devil Wears Prada. This woman is insane and reminded me of a couple of particular magazine editors from the late 80s.

Apatow accepted congrats last at Universal’s swellegant gala at Tavern on the Green after the Lincoln Center premiere. But he did tell me, “It’s all because of Amy.” A native of Rockville Center, Long Island, Schumer brought her mother, sister, and best high school pals to the premiere. (Her parents are divorced. Her father Skyped in to watch the red carpet.)

Schumer is 34. She’s been on the comedy club circuit for a long time, and included many of her friends in the movie. She’s been on a tear all winter, doing a guest gig on “The Bachelorette” and getting ink almost every single day. Like Joan Rivers or Roseanne Barr, she is just who she presents– you can tell there is no artifice. “Trainwreck” is her real life with a twist to give it cinematic structure. She hits the same real notes as Nia Vardalos did with “My Big Fat Greek Wedding.” Watch word of mouth catapult “Trainwreck” when it opens.

As for Norman Lloyd, mazel tov. He was feted in Cannes a couple of years ago. He hasn’t made a movie since 2010, but it looks like this is his comeback. He turns 101 this fall. PS I’d love to see him on Jimmy Kimmel.