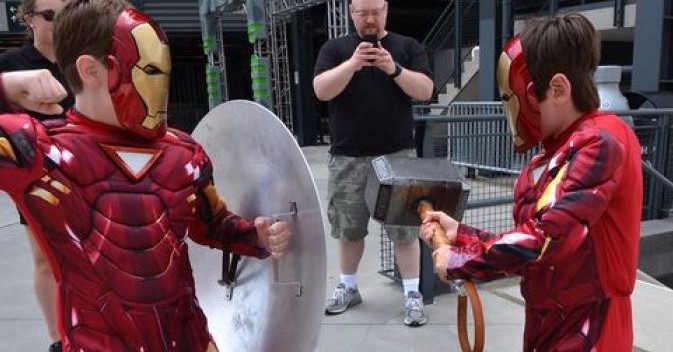 “Spider Man: Turn off the Dark” producer Michael Cohl must be having gruesome nightmares these days.  After that $75 million debacle he probably thought he was the only producer to have problems with otherwise golden Marvel Comics.

But Cohl and his team have just announced the cancellation of this summer’s Marvel Experience, a live stage show that is finishing a disastrous run in Philadelphia tonight. The Marvel Experience will not be coming to New York, Philadelphia, Chicago or St. Louis next. It’s done, it’s over. Tickets just didn’t sell.

Call it “Spider Man: Turn off the games!”

The Marvel Experience– described as “immersive” and 3D, where kids (or adults with issues) played games and acted out super hero experiences– was of such little interest that despite over 70,000 views on YouTube, no one bothered to comment on it.

The show received terrible reviews, too.

From Scottsdale last December someone wrote:
Not worth the time, much less the price of admission. The VIP package doesn’t add anything of value.

It’s a colorful game of waiting in line, dodging small children. The “training simulations” aren’t calibrated, so you can’t play them without encountering more glitches than hits, making the 40 minute wait that much more bitter in hindsight.

The registration was broken, so we didn’t get several of the features of the expensive package or any of the personalization that is supposed to be a feature of the whole Experience itself.

The opening scene had to be restarted several times because the audio and video didn’t sync up.

The room transitions were poorly managed, with a bored looking person in a SHIELD t-shirt letting the music play a few loops before pressing the button to open the doors, making for a really engaging and immersive time, imagining you’re in training for an actual government contract job, waiting for the instructor who is running behind due to a pile of paperwork and red tape.

Other reviews were similar from Philadelphia, where the show closes tonight.

Is there a moral to be learned? Like– Marvel is meant for film and not for theatrical? I think we’re starting to get that message.

PS If you’ve seen the Marvel Experience somewhere, please tell me what it was like– either @showbiz411 on Twitter or here on the comments section.