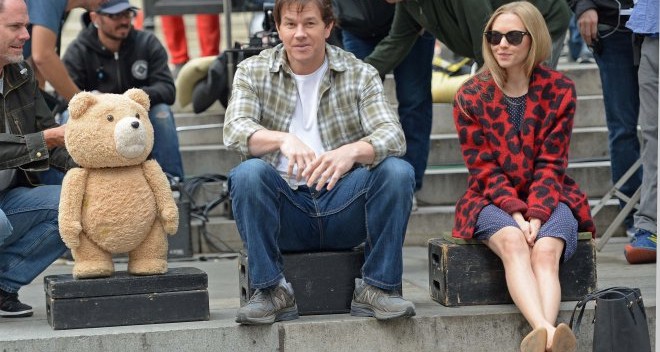 “Ted 2” is not a hit. Last night the sequel to the original Seth MacFarlane movie opened $7 million short of the original at $13.2 mil. The first movie did over $20 mil on its opening night. This spells disaster for the opening weekend.

The thrill is gone. “Ted 2” was universally panned. Its first twenty minutes are funny enough, but the middle of the movie is a muddle. And it’s racist, misogynistic, and deeply dark. Not an easy sell to women.

Mark Wahlberg must have found it “un-bearable” on opening night. He didn’t stay at the Ziegfeld and he never showed at the fancy after party at the Central Park Boathouse. A source said Wahlberg had his own private party. Everyone else showed up, however, including Liam Neeson, but of course he lives basically across the street. He has one cameo in the film.

Sequels to quirky hit comedies are tough deals. It’s really best not to make them. But the lure of the money is too much for the participants to pass up. “Sex and the City” is a case in point. “American Graffiti” even had one. All not to be mentioned again. The second “Legally Blonde.” Or “Miss Congeniality.” You’re basically remaking the first movie, and the novelty is gone. No one remembers “Airplane 2” fondly. We are currently facing down “Magic Mike XXL.” And so on.

Meantime, Disney and Universal are having big summers. Warners has the best action movie in ages with “Mad Max: Fury Road.” Fox has done very well with “Home” and “Kingsman.” There are always little bumps in the road. “Ted 2” shall pass. But if you see it– look for the “Beetlejuice” joke. I loved it. (And PS this is why you don’t remake ”