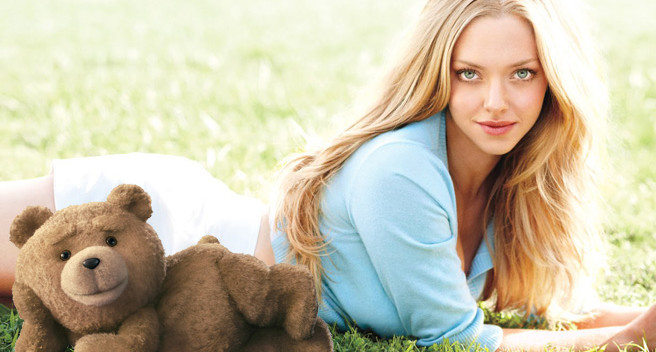 No one and nothing is safe in Ted 2, a rerun of Ted 1 that tries to get serious and then gives up. Ted is a stuffed teddy bear which was brought to life in Ted 1 and voiced by Seth McFarlane. Ted’s owner is John Bennett, played by Mark Wahlberg. In Ted 1, John had a girlfriend named Lori, who objected to Ted coming between them.

Now Lori is gone– she and John have divorced– and Ted is improbably marrying the local cream puff. Broadway’s Rob Ashford stages a complete Busby Berkley musical at the start of Ted 2 that is really the highlight (albeit a few odd moments) of a movie that starts with promise, wanders in the desert of no ideas, and then comes to an end without a moment to spare.

Ted and John have charm to spare, and use it in the first third of Ted 2. McFarlane poses an interesting idea: is Ted a person? He has a wife, a job, and wants a baby. But he’s a stuffed animal. All right, he’s animated.

Wahlberg does something intriguing here: he plays the second banana to Ted. Ted 2 is about the bear. John is incidental. So Wahlberg commits to being his loser friend who blew his marriage and now supports a teddy bear. Wahlberg goes from leading man to supporting character. He’s so good at it, I kept wanting Ted 2 to become something.

There are some funny recurring riffs. The best is that Amanda Seyfried takes on Ted’s case as his lawyer who has no clue about contemporary culture. This makes for fun. But Seyfried must be the best good sport in the world. The script gets laughs by comparing her beautiful looks and huge eyes to Gollum, the bug eyed monster from Lord of the Rings. It’s to Seyfried’s credit that she went along with this. She’s destined for bigger and better things.

Raunchy and black-humored, Ted 2 is meant to be irreverent and over the top. These ambitions are achieved. There is foulness at every turn. I really enjoyed that for about twenty minutes. But then you begin questioning where we’re going — is there a point? Can it be sustained? Seth MacFarlane is no dummy. But Ted 1 was a finite idea. Making a sequel exposes the idea as shallow and throwaway. Too much is too much.

Universal doesn’t need to care about Ted 2. Jurassic World is such a hit they can drop this and get away with it. Last night’s premiere at the Ziegfeld was notable for being a little weird and starting very late. Anyone can have an off night, and this was it. Universal has bigger fish to fry this year.

As for Justin Bieber, he’s listed in a sequence including Bill Cosby of people who MacFarlane thought would get booed by the audience just at the mention of their names. It didn’t quite work.

On the upside, you will learn more about marijuana, how to smoke it and grow it, then you ever needed. Extended  cameos from Liam Neeson, Morgan Freeman, John Slattery, and a longish but welcome scene with Nana Visitor, of “Star Trek” and “Ryan’s Hope” fame.