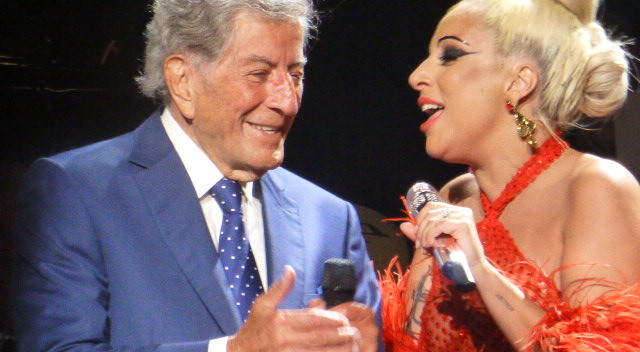 Tony Bennett, ageless, and Lady Gaga, reinvented, took Radio City Music Hall last night for the first of four sold out shows. She had nine amazing costume changes. He sang like time has stopped still. Martin Scorsese was in the fifth row. What else do you want?

I’m a big fan of the Tony-Gaga project, the album “Cheek to Cheek,” the whole thing. Tony is really almost 89, and the classic American songbook just flows out of him. “My record company says why do you keep singing old songs?” he tells the audience. “And I say, because I don’t know the new songs.”

Also, they are not constructed in any way that would help him. They don’t have melodies, flourishes, or crescendos. Tony Bennett scales crescendos like they are Mount Everest. You had to watch him go after Duke Ellington’s “Solitude,” last night. It’s a not well known song, like “Cheek to Cheek” or “Anything Goes.” Bennett approaches it not just as a skilled mountaineer, but a mathematician. He conquered it with such grace last night that he got a standing ovation from people who didn’t even know what was going on. They just knew they’d heard something amazing. 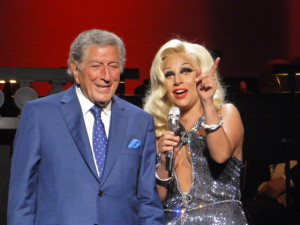 Gaga made nine costume changes in under two hours. She doesn’t need to. It’s her thing. Her voice stands on its own. But it’s part of her shtick. One of the outfits, a red lace number, was totally see-through. Totally. She also evoked Marilyn Monroe, Barbra Streisand, Cher, Totie Fields, and a half dozen other icons. She moves from elegant to kitschy and back again. Each one is a Broadway show unto itself. She knows how to make entrances.

After the show, backstage, I complimented her on the dresses. She said, wisely, “They’re just the dessert.” The voice is the main meal. It’s four star.

Gaga’s jazz voice was the surprise of all time when she sang with Tony on his Duets II album. Then they made “Cheek to Cheek” and you hear that it’s really real. She’s not quite Natalie Cole, but with time and training she will conquer some of the high notes she’s looking for. Her middle range is exceptional, like buttah. Obviously, her sense of theatricality doesn’t hurt. This is what she born to do.

Four shows at Radio City, all sold out. As Tony sings, after eight decades, “Who’s got the last laugh now?” Also, really, you’ve got to see this audience. It’s one half middle aged- to senior citizens, one half young people and trans everything. And there’s a lot of crossover. For the younger half, the 36 piece orchestra plus Tony’s famed quartet must be a revelation. Please– shout outs for Mike Renzi, Harold Jones, Marshall Wood, and Gray Sargent. Live music! No pre-recording, samples, synthesizers. Imperfections. The most gorgeous trumpets, saxophones, piano, acoustic guitar, and “Count Basie’s favorite drummer.” (Who?, thought around three thousand people. Count Basie, dammit!)

Tony, Tony, Tony: He has this neat trick. He sings “Fly Me to the Moon” a Capella, unadorned, unplugged as the kids say, no mic. In gigantic Radio City, which he points out was “designed by Liza Minnelli’s father” (not exactly, but a beautiful Tony take on Vincente Minnelli’s two year run 1933-35 as set and costume designer for all productions). You could hear a pin drop in the hall, and Tony’s voice floated up, up, up to the farthest reaches or Art Deco arches on waves of cushiony air. The commitment, the resolve, the love made every note fly, and they landed in the rafters to rapturous delight. It was like a Derek Jeter home run.

That, my friends, is entertainment.