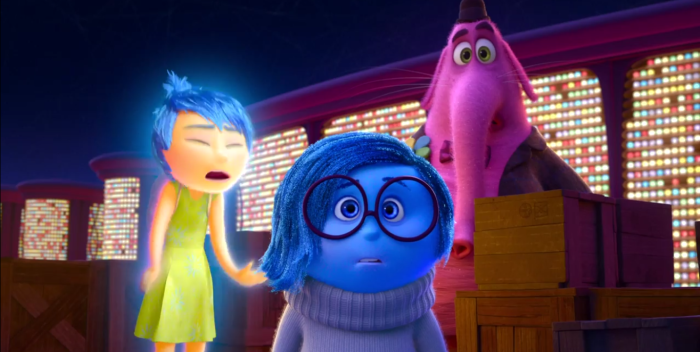 “Inside Out” is Pixar’s most original, complex, clever, illuminating and exhilarating film they’ve had in years.  By far their smartest animated feature, is a truly heartfelt and moving exploration of the mechanism of the brain (inside) as it affects a young girl’s adventures from birth (outside).  At the recent morning screening at the famed El Capitan in Hollywood, children were surprisingly quiet and completely transfixed.  Director and co-writer Peter Docter (he helmed the wise “Up,”) has created an innovative story that depicts the myriad emotions kids feel in particular and how they voice them. Inside Out is a dazzling, creative film that will surely put Docter and co. back in the Oscar race.

The set up is deceptively simple: We watch Riley, a cute baby girl, grow into a popular athletic 11 year old in cozy Minnesota. But when her family is uprooted to San Francisco as she turns 11, Riley starts grappling with adolescence. From the very beginning, as we watch her development in the world, we also see Riley’s five emotions– hugely inventive characters inside her head.

Joy  is played by Amy Poehler,  Fear by Bill Hader, Anger by Lewis Black, Disgust by Mindy Kaling and Sadness by Phyllis Smith.  All these said emotions are based at ‘headquarters,’ where they operate from a control panel inside her lively head.  Just as in life the Emotions can’t agree on how to handle the seemingly seismic events going on in and outside of Riley.

This leads Joy and Sadness lurching out of home base into way weird and perilous adventures in Riley’s brain that are all visually simply stunning. Eventually they run into Riley’s imaginary friend, Bing Bong, lovingly voiced by Richard Kind (he sounds like your favorite great uncle and the Maytag repairman all rolled into one, and maybe smells like fresh deli pickles), who kind of steals the show as the most memorable of the characters.

The kids in the audience, while not getting all the emotional concepts, were nonetheless rapt in awe from what they were seeing on screen.  The adults, me for example, never lost interest for a second. That’s because Josh Cooley and Meg Lefauve’s terrific script works on several levels simultaneously– small children understand are able to laugh at and identify with the simple issues, while adults may be surprised at the layers of sophistication the screenwriters took in parsing the cerebellum.

“Inside Out” is a tour de force along the lines of “Wall E” and “Toy Story 3.” It’s totally original, not from a sequel or known material, and sheer perfection. This is one time when you hope there will be sequels.