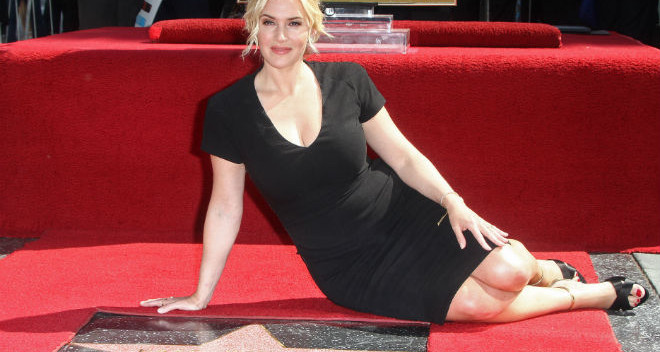 So much went on last night at the premiere of Alan Rickman’s “A Little Chaos” including a reunion with Oscar winner Kate Winslet, former New Yorker, and maybe will-be-again. She’s been living in London since having her third child– a boy named “Bear”– yes, really, and we all growled when she told me because you know, Kate Winslet is terribly funny.

At the swell party at the Monkey Bar following the MoMA screening– packed with A listers like Diane Sawyer, Christian Slater, director Fred Schepisi, and so on– Kate said of Ned (real name Abel Smith, nephew of Richard Branson): “He makes it all work. Whenever I’m too tired to do something, or I just throw up my hands and say, There’s no way we can get from here to San Francisco in three days, he calms me down and says Yes we can and does it. It’s quite remarkable.”

She said that her son, Joe, whose father is director Sam Mendes, recently realized he wasn’t living in New York anymore and really missed it. Kate said, “I think he wants to come back. You never know.”

Truly, Winslet– who I met years ago when she told me to “bugger off” at a cocktail party–looks and sounds better than ever.  She’s also at the height of her acting powers. In “A Little Chaos” her character at one point must relive a terrible trauma from her past. Winslet just seeps through until you’re so mesmerized that you forget it’s an actress speaking the lines. She knows what she’s doing.

Later in the night, when I circled back, Kate was sitting in a Monkey Bar booth having a heavy conversation with a woman who was ablaze in long, thick, frizzy gray hair framing a cherubic face. Winslet, you know, has all kinds of friends in New York from her long stint as a Mom in Chelsea. (Her PTA pals used to come to all her premieres.)

“This is Belinda,” Kate said. “She’s a magician.” An illusionist? I asked. “No, a real magician,” Belinda replied. As a journalist, I worried: “Can you make people disappear?” “I can’t,” she said, and I was relieved. Kate said, “You must visit her parlour, and she’ll show you. You can only bring eight people.” She gave me such a dead serious expression that we both almost laughed. “Now we must get back to our important conversation.”

Kate has two big movies coming this fall, after “A Little Chaos,” which is a summer break from dinosaurs and the like.  She co-stars with Michael Fassbender in the Steve Jobs movie as Joanna Hoffman, and in Jocleyn Moorhouse’s “The Dressmaker,” which we should see in the fall and sounds like her ticket to back to the Oscars. Winslet already has a Best Actress statue for “The Reader.”