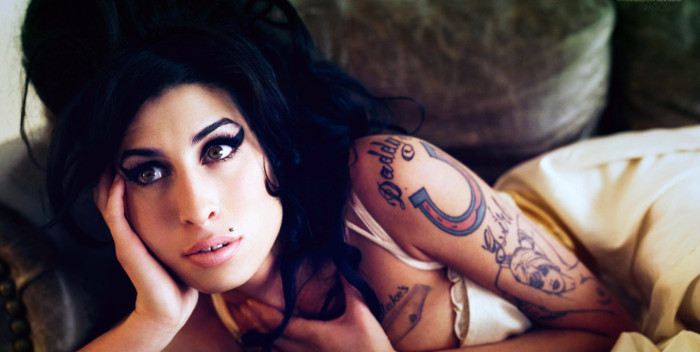 Be prepared for major heartbreak with “Amy,” Asif Kapadia’s exceptional documentary about jazz/soul/R&B singer Amy Jade Winehouse. The Grammy-Award winning “Back to Black” singer died at age 27 of alcohol poisoning. She also suffered for many years with bulimia that weakened her heart. The movie opens with Amy as a chubby-cheeked, bubbly and bright teenager with a powerhouse voice. It ends less than a decade later with Amy as an emaciated mess stumbling on a Belgrade stage months before her death on July 23, 2011. (“Amy” comes out July 3rd, in a couple of weeks.)

Another reaction you may have is anger.

“I kind of wanted people to get angry,” Kapadia told me following a private screening at the Crosby Street Hotel last week.

There is plenty of anger to go around. It can be directed at the crazed paparazzi camped outside Winehouse’s London home that captured every stumble she made to the food and liquor shops. There’s her concert promoter turned manager who booked her into disastrous performances in Brazil and Belgrade when she could barely stand let alone sing. There’s also ex-husband Blake Fielder who turned her on to crack and heroin but was in prison when Winehouse died. Then don’t forget the many hangers on and enablers who lurked in the background who profited financially and did nothing to help her.

For the director there was the central question of Winehouse’s death. “It’s sad that nobody stopped it. That was the big question was why nobody stopped it. Why’s she onstage? I don’t get it. Who’s paying for those tickets? Who’s enjoying that performance?”

Kapadia interviewed hundreds of people and told me, “I know a lot.” There was a lot of material he decided not to include which would have made the film even darker.

The Winehouse family is problematic. Probably no one comes off more poorly than Amy’s father Mitchell Winehouse. He initially participated in the documentary but after he saw it he has badmouthed the film and how he is portrayed. At best he’s an indulgent and doting father who was helpless to cure Amy of her addictions. At worst the former taxi cab driver comes off as a father who basked in his daughter’s celebrity and profited personally and professionally.

In the film Amy’s mother Janis comes off weak and unable to control her daughter. Although he tried to contact him, the director told me Winehouse’s brother Alex would not talk to him.

Early on in the doc it’s revealed that Mitch began having affairs when Amy was 18 months old. Her parents divorced when Amy was 9. There’s audio in the film where Amy complains about her father not being around. It’s not clear when he came back into her life.

The scene in the film where Mitchell comes off the worst took place in 2005, when Amy’s first manager, Nick Shymansky – who contributed some great never-before-seen video footage taken from early in her career – tried to get her into rehab. Amy said she would go only if her father said she needed to. She sweet-talked him and it became the line in her famous hit, “Rehab”:

When I asked Kapadia if anyone could have done anything for Winehouse he said it was then. “I think the more you do the earlier the better,” he told me. “You get diminishing returns if you wait too long.”

Director Kapadia said in particular one person in Amy Winehouse’s life is responsible for her death but he wouldn’t divulge the name. He would only say that person is not Mitch Winehouse, who’s been on the warpath against the film.

I mentioned to Kapadia that Mitch overlooks how the documentary showcases her great singing-songwriting talents. “I know,” he told me. “It’s all about him. It’s all about him,” he said. “He never mentions her.”

The biggest gift of the film is how it focuses on Amy Winehouse’s amazing lyrics, which appear on the screen as she sings. The director told me that finding that approach to tell her story was accidental.

“I started doing research and it was exactly the same, you’re like, ‘God! It was always there in front of us but I didn’t listen carefully enough or something. And it’s really after doing a bit of research, you go back you look at the lyrics and you go, she’s written it all down. Everything you need to know about Amy’s life was there, in her diary that are her lyrics. Every single song is based on a real incident kind of documenting her own life in her own words. You know ‘Stronger Than me’? It’s all about that. She wants someone who’s stronger than her.” Noted Kapadia, “She’s a great writer. That was the big revelation. The voice is what everyone talks about. But I think the writing is even better.”

The biggest challenge to making the film Kapadia said was initially getting people closest to Amy to talk. This was unlike his documentary “Senna,” about Ayrton Senna– the subject of the director’s BAFTA Award winning documentary about the Formula One driver, where everyone close to him wanted to contribute. “Sadly, tragically, with Amy it was almost the opposite. Nobody wanted to talk,” Kapadia told me. “Reading between the lines it was about me. It was about me. What are you going to do for me?” He added, “There were a lot of people who didn’t get along. A lot of people in different places who disliked one another, who blamed one another.”

Kapadia admits the movie is heavy going for audiences. “But there is laughter. People do laugh. She’s amazing.” Noting that Amy Winehouse’s public drunken binges became comedy fodder, he said his “main job if there was a job was to” show another side of her. “People knew the records and liked the songs but didn’t like her,” he said. After viewing the doc, “People come out of watching these scenes loving her.”