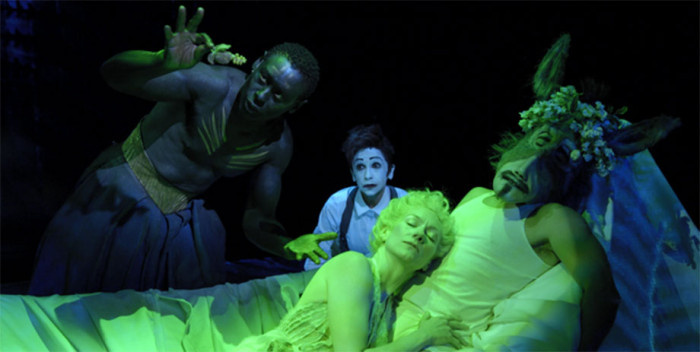 Julie Taymor is so beloved by her past actors that pretty much all of them came last night to the DGA to see her film version of “A Midsummer Night’s Dream.” I do mean Anne Hathaway, who Taymor just directed at the Public Theater; Helen Mirren, who was her Prospero in “The Tempest”; and not one but two actors who played Spider Man on Broadway– Reeve Carney and Matthew James Thomas. Judd Hirsch, playwright Israel Horovitz, Montego Glover, and ABC’s Deborah Roberts were among those who watched in awe even though they hadn’t worked for Taymor. Famed lyricist Tim Rice, who worked with Taymor on “The Lion King,” stopped by the party afterwards at the Hudson Hotel.

“AMND” will open unusually– on Monday, June 22nd, all around the country. Find it. When Taymor and husband (Oscar winning composer) Elliot Goldenthal staged “AMND” in Brooklyn in 2013, it was a mind blower. The Theater for New Audience– not BAM– built a whole theater for her. Taymor’s production is an ensemble piece produced out of her wildly inventive imagination. There are no stars, per se, but her Puck, played by British actress Kathryn Hunter, is the centerpiece. Her performance is so remarkable that it’s amazing Hunter isn’t a mega star here in the US.

Plenty of the cast was there last night, including Max Casella, who was once Doogie Howser’s pal on TV and also a minor Soprano. He is stunning in this film. So are Tina Benko, David Harewood, Joe Grifasi, and on and on.

Taymor’s costumes, sets, and lighting are, as usual, the most inventive you can see in theater. But what she’s done is shake all these ingredients up and deliver what looks like a 3D film. It was presented in the round, so to speak, in Brooklyn, where action was ceaseless from four corners and above. Somehow, using terrific directors of photography, Taymor has been able to film all of it.

I couldn’t help thinking how she managed to select the right pieces to keep this whirling Dervish of a play moving, moving, moving, all the time, while maintaining consistency. You’re watching the audience watch the play, while at the same time you– us– are in the center of the action. Shakespeare, wherever he is, must be thrilled. “AMND” just glows under Taymor’s attention. And it’s very contemporary. Take teens if they don’t want to see it. This is a landmark event.