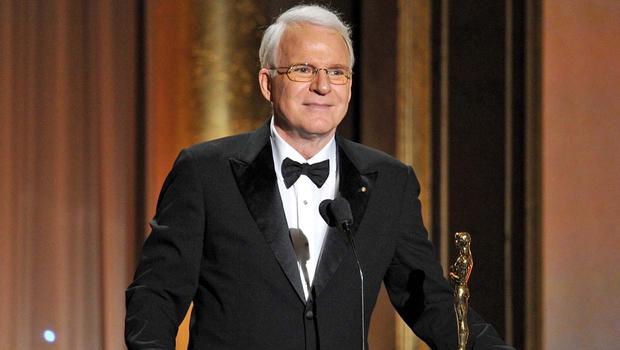 This the kind of crowd you get at a roast for Steve Martin: famed and legendary architect Frank Gehry, a longtime friend of Steve’s, was a guest at the Dolby Theater. I asked him if he was excited to be there, and Gehry quipped, “Where’s the bathroom? I didn’t design this, so I don’t know.”

The American Film Institute Lifetime Achievement tribute to Steve Martin airs June 13th. Here are some notes from the show:

She said: “Steve has taught me so much. Like never shake hands when an open mouth kiss will suffice. Also, if you’re going to pick up Martin Short, remember to support his neck. Steve also taught me to give back. For instance; Steve gives all of his old white suits to Lesbians for their commitment ceremonies.”

Lily Tomlin automatically cracked up the audience by riffing because she couldn’t read the main monitor. Lily, of course, saved herself and gave a heartfelt tribute to her friend.The pair co-starred in one of the great comedies of all time, “All of Me.”

Amy Poehler did a spoof as an auctioneer. Conan O’Brien then pointed out that, “Steve is fantastic in all he does, Actor, Writer, Director, Author, Magician and Lover.”

Steve Carell countered:  “I don’t agree with Conan about Steve being a fantastic lover. I know from personal experience that he is not. He is passionate, but Steve, you are lazy and selfish.” Carell then told Steve he “owed everything to him.”

There were videos from  Tom Hanks, Meryl Streep, and Ron Howard were interspersed throughout. Howard pointed out that  “Somebody as multifaceted as Steve, he’s allowed to be a dick. But he’s not.”

Carl Reiner then stood up and remarked, “I think I’m the oldest person in this room. Is anyone older than 93? “ After the audience applauded rapturously, Carl remarked, “ I just looked and my zipper is down, ok I’m that old.”

Martin Short came out and just killed it. He started with, “I’m so happy to be here for Steve, although that might be the Xanax and Vicodin talking. I’ll make this quick because my Uber is waiting and you know how testy Randy Quaid can get.” He continued, “I have known Steve Martin for a long time. I knew him when his urologist thought it was still safe for him to wear white suits.” Referring to Martin’s love of magic and his start at Disneyland, Short said, ” As a young boy, Steve turned tricks at Disneyland. Or I should say, he pleasured men with his tricks. He would play games with Uncle Walt in the parking lot; Jew or not a Jew.”

Martin went on: “Steve is very conscious about his physique. He’s been on Jenny Craig more than Mr. Craig. Steve is that rare bird who is both funny and sexy; I invented a new word for him, fucksy. Let’s face it, Steve is pale. To me, it looks like someone mounted a toupee on a urinal. We’ve done five films together. Fun fact, Steve uses the same stunt double as Angela Lansbury.” Martin ended with a heartfelt rendition of the song Steve co-wrote with Edie Brickell, “Friend of Mine.”

Diane Keaton came up after and called her friend, “Dis-appropriately talented.” Diane as well sang a bit of “Friend of Mine” as well.

Mel Brooks then spoke and said, “This boy is a threat to my very existence. He’s literally built a giant wall of multi talent that no one can climb over. The he starts to win all these awards. That’s what I do, I win every fucking award. So the wall gets higher. Mr. Martin, will you tear down this wall?”

Mel presented Steve with the Lifetime Achievement Award. Steve:  “How do I top this parade of stars who have been so funny? Easy.” Steve then called Carl Reiner his second father, and said, “Carl and I were doing a movie and after 5 takes, he said, ‘funny it up.”

Referring to Martin Short, Steve commented, “Marty and I travel and tour the country. I love working with him, he understands the concept of 60/40. In an amazing coincidence, Martin Short is the name I use to check into a hotel when I want to remain anonymous.”

Commenting on Diane Keaton, Martin said, “Marty and I were in her trailer once when we were making ‘Father Of The Bride.’ She was watching the OJ trial and we were in the background talking. She said, ‘If you two don’t shut up I’m going to blow you. Marty said, “Diane, you have to work on your threats.”

Steve then ended with: “I have finally realized what a comic genius is. A comic genius is someone who decides never to go into comedy. I leave you with a quote from one of my favorites, Jack Benny. ‘I don’t really deserve this award, but I have arthritis and I don’t deserve that either. “