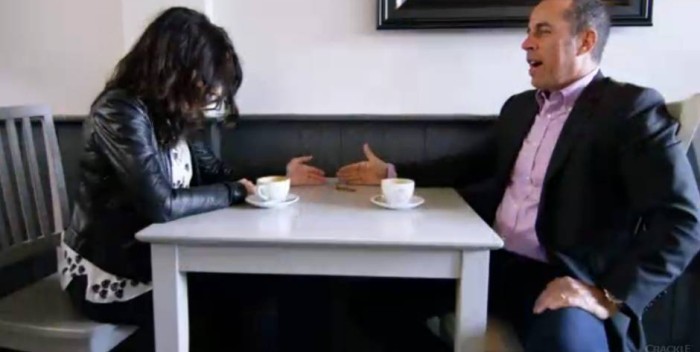 Ok. All day I’ve had a link to the new episode of Jerry Seinfeld’s “Comedians in Cars Getting Coffee” with Julia Louis Dreyfus. So weird. I watched the whole thing, about 15 minutes long, and posted a link. Now it seems all they’ve got on Crackle is a promo. But the link worked for at least a couple of hours.

So here’s my review: watch this when it comes back at 11:30 tonight. Jerry and “Elaine” are reunited. In a beautiful Austin Martin. It’s really as if they are real people who are still in touch, Jerry and “Elaine.” Jerry and Julia have an immediate rapport. They drive around Santa Monica and get in trouble. They pass Hilary Swank, driving an SUV in the opposite direction; she waves to them. Julia says, “I guess we really do live in Hollywood.”

They get tangled up on a side street with a woman in an SUV who realizes it’s them and won’t movie. Jerry says, “We’re having a Seinfeld reunion, and you’re not in it!”

The pair goes into a coffee place and immediately get into trouble a la “Seinfeld.” It’s very meta and weird that they actually find themselves in a “Seinfeld” episode the way fans of the show– like you and me– would say. They finish each other’s sentences. At one point, Jerry puts Julia on the phone with his real life wife, Jessica, and Julia thanks her, basically, for polishing Jerry up since the series went off the air.

The episode is time well spent. I think for “Seinfeld” fans, you’ll watch it over and over. JLD, whom I’ve interviewed a lot, is just as she is in person: delightful, sarcastic, very real. The reunion is very fulfilling. It’s actually about something: friendship.