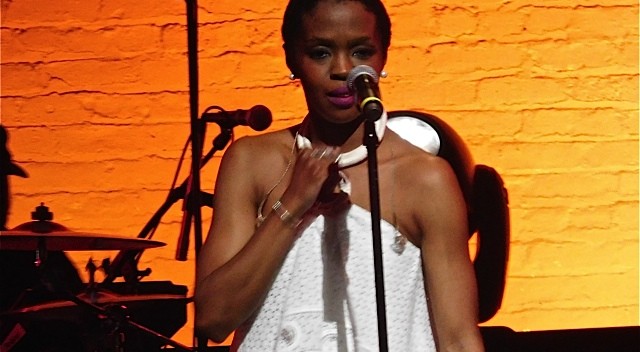 Lauryn Hill’s rousing performance following the screening of “What Happened, Miss Simone?” Monday evening at the Apollo Theater turned into a celebration and tribute to the genius and artistry of the musician/activist Nina Simone. (The documentary will air on Netflix on Friday, June 26.)

Hill, who first performed at the Apollo at age 13 where she was booed for singing “Who’s Lovin’ You” off key (https://www.youtube.com/watch?v=gdwhGmvB7aA), got a very different reception last night.

Dressed in a white halter-top and flared pants, Hill looked terrific, and even channeled the legendary singer; her outfit resembled an ensemble Simone wore in a legendary performance featured in the documentary directed by filmmaker Liz Garbus (“The Farm: Angola,” 1998).

Hill’s voice was raspy from some ailment mentioned by producer Jayson Jackson in his introduction before her set, but that that only made her voice sound even more like Simone’s baritone. In her nearly 50-minute set, Hill danced and swayed and song signature Simone numbers.

The former Fugees singer opened with a moving rendition of “Ne Me Quitte Pas” and followed up with a dynamic version of “Black Is the Color of My True Love’s Hair.” She sang backed up by a full orchestra that included lush sounds of string instruments.

There were problems with the sound mix and some failed starts and stops, but Hill is a perfectionist and demanding bandleader and it all finally came together. For her next number she enthused, “We goin’ try to rap with this,” and Hill performed a new rap song inspired by Simone’s music.

Afterwards she introduced the terrific Jazmine Sullivan with, “She can sing for the both of us tonight,” and added, “Watch this!”

The song is included in a Simone tribute album timed to be released in conjunction with the documentary, which includes artists Hill, Common, Usher, Mary J. Blige and Simone’s daughter, Lisa Simone Kelly, a singer who also appears in the documentary and provides some of the film’s most poignant moments and insights into her mother’s life and career.

After Sullivan’s performance, Hill returned and ended on an even higher note, with her take of “African Mailman.” The long instrumental showcased the band with solos by the drummer, violinist and backup singer. But the program was all about Lauryn Hill and her channeling of Simone, and despite the crowd’s stomping and cheering as the show ended it’s nearly hour-long set, there was no encore.

As suggested by the title, “What Happened, Miss Simone?” the documentary portrays a musical genius, but also a troubled artist who often fell on hard times. Driven by her art and social activism, and constrained by racism and her own inner demons – Simone was diagnosed late in life with bipolar disorder – she was also controlled by an abusive husband/manager Andrew Stroud, a former cop. He furthered her career but also beat her. There are archival segments of the couple together and present-day interviews with Stroud, who did not attend the premiere. (Simone’s daughter, who is promoting her new album, also did not attend.)

Notable celebrities at the premiere included grandchildren and friends of Simone, along with her longtime musicians Al Schackman, Lisle Atkinson and Leopoldo Fleming. Atkinson, a bass player who played with Simone for five years, told me her legendary tantrums and difficulty as a performer were exaggerated and he never had a bad moment on stage with her. He told me he believed she would want to be remembered for her music.

Schackman, a guitarist with perfect pitch, performed with Simone throughout her career and his astute comments and obvious love and esteem for Simone provide for some of the film’s most perceptive and informative moments.

In her introduction from the stage to the film, Garbus thanked Netflix and all the contributors to the documentary and related a story from Simone’s memoir. “Friends say I might have trouble with the crowd here because the Apollo is well known for giving artists a rough time,” read Garbus from Simone’s notes. “And I’m well known for the same to audiences.” The audience laughed. “So the two of us getting together was looked at as a kind of championship boxing match with the Apollo as the champ and me as the contender. In the end we fought to a draw.”

From the time she was a girl of three, Nina Simone aspired to be the first black classical pianist. “That was all that was on my mind,” she said in an interview in the doc, where in archival footage she famously said of her political activism that often got her into hot water, “I don’t think you have a choice. How can you be an artist and not reflect the times?”

Earlier on the red carpet, I mentioned to Garbus that Nina Simone is having a moment. Gina Prince-Bythewood has her protagonist sing “Blackbird” in “Beyond the Lights” and Simone’s music seems to be getting a new audience as well. Garbus said, “It’s very interesting. You know I can’t explain that. I was in Starbucks this morning for half an hour and what was playing was Nina Simone. I guess we just needed her.”

Speaking of her inspiration for the doc, Garbus said, “I’m a conduit to bringing her to audiences that didn’t know her before or giving her audience who loved her a little more of her. That’s a wonderful position to be in.”

The director noted that Simone is one of the greatest artists of the 20th-Century who had 15 ways of singing the same song. When she undertook the project, Garbus told me she didn’t know Simone’s personal life. “But of course as soon as I started to peel away layers of that I was even more committed and desirous of bringing her story to the screen.”

As for what Garbus hopes audiences take away from seeing the film, she told me on the red carpet, “I want them to listen to her music all over again and for that listener it will be a delicious experience because you’re going to know what this woman went through and what she was bringing to that music.”