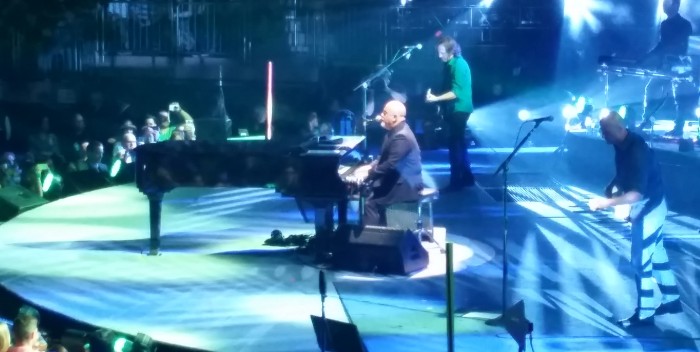 It turns out there is a place in the world for an Angry Young Man. Especially now, when he’s finally happy (and about to become a dad again).

Last night I checked in on Billy Joel’s monthly residency at Madison Square Garden. His publicist, my old friend Claire Mercuri, invited me. I was laughing on my way into MSG, saying Oh I’ll bet they give away lots of tickets. After all there must be plenty of seats if he’s playing there every month.

My bad: the Garden was sold out last night as if it were the Rangers’ most important game ever. As if Billy hadn’t played MSG in three years. And I mean sold out. Every single possible seat was taken, even the huge chunk of seats behind the stage. All the boxes. Up to the rafters on all sides, even way at the top. And really, I looked everywhere, even took pictures. It was sort of shocking. This was Billy’s 17th monthly show in a row.

It’s an amazing sight to behold.

The first time I saw Billy Joel was in April 1976 at the Cellar Door in Washington DC. It was a little club. “Piano Man” had already been a hit, and I was a fan.  Subsequent albums “Streetlife Serenade” and “Turnstiles” had come out. I loved them. But they were duds commercially. Columbia Records was unhappy, Billy was unhappy. His big breakthrough with “The Stranger” was 18 months away. It was kind of a lull, but no one knew that yet.

So Billy Joel, from my second home of Long Island, played this tiny club and I sat at the lip of the stage while he pounded away on the keyboards singing songs from his three official albums. What I remember: He had a big, dark Jewfro. When he played the piano, it was like a time lapse flurry, especially on “Angry Young Man.”  He was clearly a trained, and natural. musician, dedicated to this craft. I was in, for life.

Fast forward: it’s 2015. It’s like, forty years. Is that possible? In between I’ve seen Billy Joel dozens of times, all at the Garden. He used to leap among pianos, play using his elbows, stand up, slide around. He and Elton John were neck and neck on who could outdo each other using the piano as a sock puppet. Liberace had nothing on them.

Billy is 66 now. (I have also aged proportionately.) He is bald and has a white goatee. There are no more acrobatics on Steinways. He sits at a piano placed on a turntable so he is always facing some part of the crowd. Occasionally he gets up, bops around, but that’s it.

Otherwise, nothing has changed. Billy’s commitment and musicianship have never flagged. His voice remains pretty close to the original, maybe better because it’s less nasal, richer. He is always in the moment.

The songs– a vast catalog that stops in 1994 with “River of Dreams–stand up beautifully. They have a classic timeless quality because they’re built on doo wop, jazz, Tin Pan Alley, R&B. They are almost all stories, with characters. The audience knows the people who inhabit them as if they were Dickens or Damon Runyon. Every one of the 20,000 people in MSG knows a Brenda or Eddie from “Scenes from Italian Restaurant.” They all know someone who quit the rat race a la “My Life.” We all know an “Uptown Girl” (although maybe not like Christie Brinkley.)

There should be some special award for singing along with “Piano Man.” Like “Born to Run” or “Every Breath You Take,” it’s an anthem that never grows tired. The lights go up and the whole crowd sings every word. You think it’s corny and then halfway through you realize how moving all those stupid people in the song are– “the regular crowd shuffles in”– and the audience is shouting — shouting— the names of each character as Billy introduces them– “John at the bar,” Davy’s who’s still in the Navy, and Paul the real estate novelist. They are old, dear friends. (I was actually wondering last night what had happened to all of them.)

You understand– MSG has become that bar, these 20,000 people are the regulars, and they will all be back next month for show 18. Everything about Billy’s monthly meeting of true believers is honest and intimate, you’re getting 100% of him, and you leave feeling great. What else can you ask for? Hah! There was a guest cameo by the Rascals’ legendary Felix Cavaliere on his great hit “Good Lovin’.” A gift from heaven.