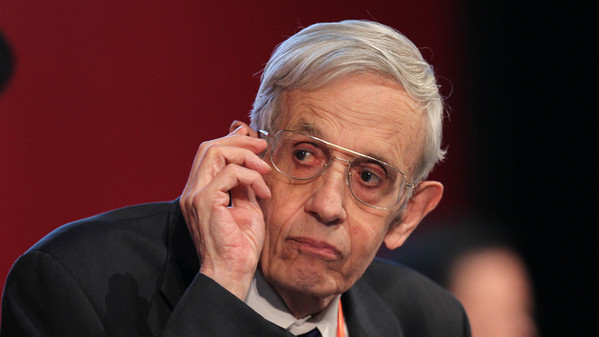 John Forbes Nash, 86, and his wife, Alicia, 82, died yesterday on the New Jersey Turnpike in a taxi accident. Nash was the brilliant award winning subject of Ron Howard’s Oscar winning movie “A Beautiful Mind.” What an ignominious end for such a celebrated genius and a lovely couple.

I had the pleasure of meeting the Nashes in October 2012 during the Hamptons Film Festival. At a reception at the home of Silver Cup Studios’ chief Stuart Match Suna, the Nashes were low key but extremely engaging. As I wrote then, Nash was like a “low talker” from Seinfeld. You had to get up close to hear him.

At the time, the economy was dire straits. But Nash told me “the economy will recycle itself. That’s what it does.” He was certainly right. He also said that his wife was a fan of Mitt Romney, but at the time he had not yet decided between Romney and Obama for president.

Sylvia Nasar wrote the book upon which the movie about Nash was based. The Nashes had divorced, which was not in the movie, but eventually found each other again. They remarried in 1970. What I remember about Alicia was that she was also soft spoken and lovely. What a tragic end for them. Condolences to their family.