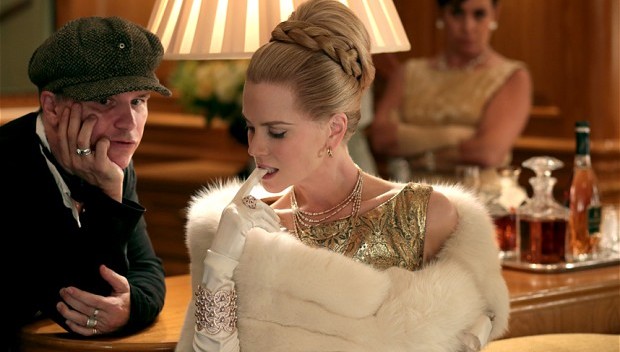 “Grace of Monaco” finally comes to Lifetime this Monday. Oliver Dahan’s drama about Grace Kelly and Prince Rainier was supposed to be an Oscar contender. It never opened in theaters after playing the first night in Cannes 2014. Harvey Weinstein rightly put it out of its misery, knowing that a theatrical release was the last thing anyone wanted– Oscar winner Kidman, Weinstein himself, or the royal family of Monaco.

The Cannes Film Festival seemed to choose “Grace of Monaco” as its premiere just because it would cause trouble. The Monaco royal family was against it. The French got a kick out of rubbing the movie in their faces. They also knew they’d get Kidman and co-star Tim Roth on the red carpet, a lot of publicity for the festival, and bad notices for the royals.

I first saw “Grace of Monaco” by accident in New York. I was invited to a screening that turned out to be focus group-test showing for civilians. When I realized what was going on, it was too late. My friend and I scrunched down and watched the mishmash of the movie, then left quickly. The audience didn’t like the film. It was also hampered by temp music that sounded like something from Hallmark Hall of Fame circa 1975.

The biggest problem with “Grace” is that it’s built on falsehoods. The whole movie hinges on Grace Kelly, who already has two sizable children with Prince Rainier, submitting to an Eliza Doolittle kind of training for Princess years after she arrived. She gives up being an actress to plan the Monaco Red Cross Ball. The Ball is intended to bring attention to the plight of Monaco– that France is about to invade and make them pay taxes. War ships are called up. An invasion is imminent. If only Grace can save them!

They give the ball. Charles deGaulle comes from Paris. Grace makes a big speech — Nicole’s supposed Oscar moment. deGaulle backs off. The wealthy Monegasques are saved from paying taxes. Grace dedicates herself to the country and to her family.

Only: that 1962 dispute was administrative. There was no pending war. deGaulle never attended a Red Cross Ball in Monaco. Grace never made such a speech.

Tim Roth plays Rainier. He’s a great actor but looks nothing like Rainier. The late Bob Hoskins would have been a better choice. Kidman is fine, but she’s too tall for the part. Amy Adams would have been perfect. Parker Posey plays Madge Tivey-Faucon, Princess Grace’s lady in waiting, as if she were doing a Christopher Guest parody of “Rebecca” as Mrs. Danvers. She is actually hilarious. But this isn’t a comedy.

A big part of “Grace of Monaco” is the story that Alfred Hitchcock wanted Kelly to play the title role in “Marnie.” In the movie, Grace finally decides she can’t do it. But that story is twisted from the truth. She still owed movies to another studio. She couldn’t have agreed to play Marnie in the first place. And by this time, she was completely retired.

I did see “Grace of Monaco” when it opened in Cannes. Twice, believe it or not, in the same day. I went to the press screening and then to the opening night. Was it changed from the prior fall? It seemed like someone had just cut up all the scenes and had thrown them in the air. They were all in a different order. But they were the same. Maybe the music was better. Kidman shines through the whole thing, but at some point the movie becomes bad Hitchcock– it’s as if they might kill Grace if things don’t work out. It’s just ridiculous.

But what a great way to spend Monday night. Get out the popcorn. Every star as a clinker on their resume. This too shall pass. I’m not kidding, though, watch Parker Posey. She’s a hoot.