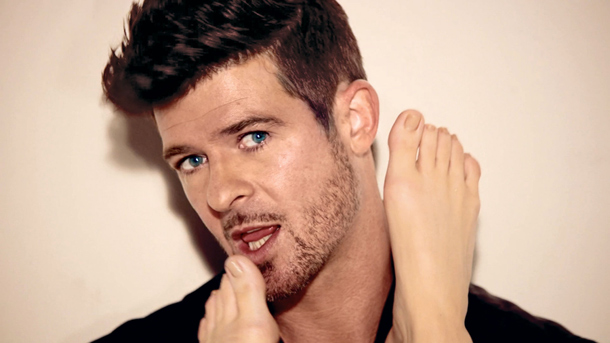 Anyway, according to the 2013 form 990 amFAR files with the government, they have over a dozen execs making well upwards of $100,000 a year. Sacre bleu! Their leader Kevin Frost takes home just under $500,000 a year. Not bad, amFAR! Charity begins at home! That doesn’t include how much it costs to fly these people around, ferry them around in chauffeur driven cars etc.

EARLIER The parade of gowns is underway in Cannes, as amFAR tries to keep its Cinema Against AIDS going another year. Sharon Stone is a no show. But Robin Thicke, whose popularity is on the slide since his divorce and “Blurred Lines” debacle, is right there on the stage. The Europeans, Asians, and Arabs don’t know about the whole Marvin Gaye thing, you see.

Stars like Sienna Miller and Jake Gyllenhaal, who are on this year’s Cannes jury, are there at the Eden Roc. Marion Cotillard is also present. But largely it’s models, models, models. Also, faux celebs who have nothing to do with cinema– like Paris Hilton and Kendall Jenner– are creating buzz on the red carpet. That’s what amFAR has been reduced to.

A few actors– like Leonardo DiCaprio and Frances McDormand– skipped the red carpet completely. Photographers have been hunting them down and shooting them as if they were on a celebrity safari.

Mary J. Blige is scheduled to perform. Charlie XCX or MCM or something is also there. Later amFAR will announce some overblown number for their night’s take.