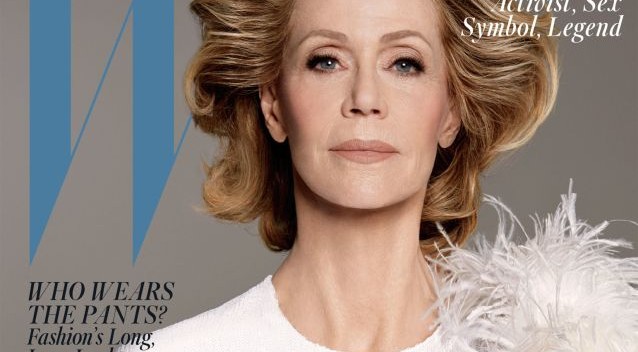 Jane Fonda — wise and wonderful– gives a super interview to my pal Lynn Hirschberg for the cover of this month’s W magazine. And the photo is by Steven Meisel, you can’t do better. Jane is sexy, smart, and sensation. She’s also the oldest person, at 77, ever to appear on W or maybe any celebrity magazine. Brava! I’ve known Jane for 3o years; she can do anything.

Right now the two time Oscar winner (and many more noms) is the belle of Ball in Cannes, where she’s appearing for L’Oreal and in a new movie there called, of course, “Youth,” directed by Paolo Sorrentino. She’s also going to share an Emmy with Lily Tomlin for their TV series, “Grace and Frankie.” Otherwise, the Emmys had better give up.

Jane also 400 other projects cooking, plus she lives with the great legendary record producer Richard Perry, has a big family including actor son Troy Garity and daughter Vanessa. Go back and read her autobiography from 2005. She tells like it is, always. Only the strong survive, and that’s Jane Fonda. It doesn’t hurt that she’s gorgeous, too!

Kudos to Lynn and her editor Stefano Tonchi for putting Fonda on that cover.