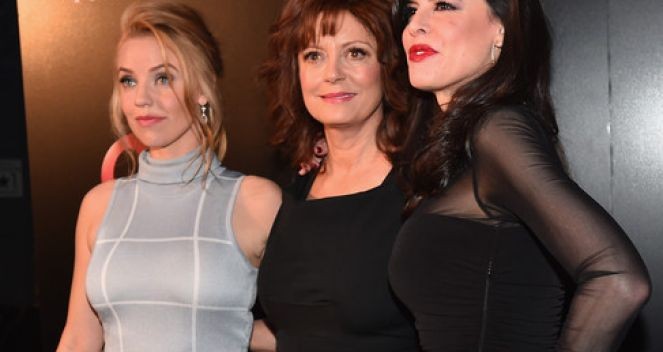 She’s also perpetually outspoken and always clever– but always in New York. The LA premiere of “The Secret Life Of Marilyn Monroe, directed by Laurie Collyer (premieres on May 30 and 31st) brought Susan west. The movie stars her own daughter, Eva Amurri, as the younger version of Gladys.

At the Q and A, when asked by moderator Brooke Anderson (of ET) on how she prepared for the role, Susan answered “Would you believe me if I said I went into an institution for two months? “ The crowd was respectfully quiet to which Susan then quipped, “I didn’t, but it sounds so intense and believable.” She then gave kudos to her co-star Kelli Garner, who is terrific as Marilyn and added, “I didn’t have the pressure of playing someone so well known as Kelli did, so you’ll never know if I did a good job or not.”

Sarandon explained her success. “You just have to do the work. You depend on the wigs and the wardrobe. I had the fear of chewing up the scenery and not grounding it in Gladys’s pain and in her reality. I also took the cue from my daughter Eva, and worked on what she did in my performance. I’ve played the old Eva too, so we switch off.”

Susan gave sage advice to Kelli. “You want to survive in this business? Know your best angles. “ Executive Producer Keri Selig explained that what drew her to make this film — based on best selling author J Randy Taraborrelli’s book. She explained that, “The story that most people don’t know is about her mother outlived her daughter by 22 years. Also, Marilyn was constantly running away from her mother’s mental illness. The truth is that Marilyn was a strong woman, she said no to studio heads, she had her own production company. She was ahead of her time. She left all her husbands, they didn’t leave her. She wasn’t trampled on, she was a smart and intellectual woman.” Writer Stephen Kronish then added, “Marilyn will never get old. It’s kind of a great career move, dying young.”