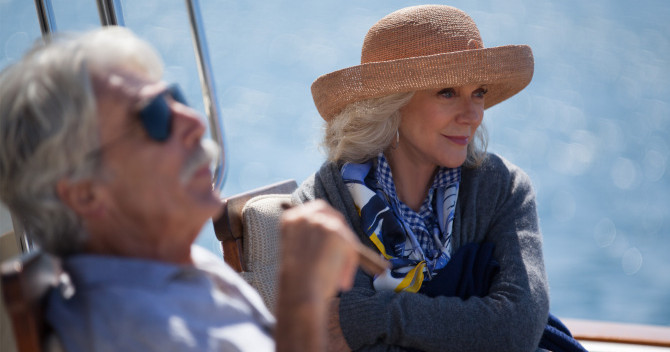 I learned a lot at the premiere lunch and dinner on Monday for a lovely film called “I’ll See You in My Dreams” which stars Blythe Danner, Sam Elliot, Rhea Perlman, June Squibb and Mary Kay Place. The movie opens in New York and L.A. on Friday.

First of all: Uma Thurman did not have face altering plastic surgery last winter. She looks the same as ever, gorgeous, and age appropriate for a movie star. I introduced her to “Doctor Zhivago” composer Lucy Simon at the dinner following the evening screening at the Tribeca Grand Hotel. “I’ve known her since she was 18,” I told Simon. “Sixteen!” Uma cried.

Indeed, we go back to the mid 80s when she was spray painted gold for the prototype cover of Fame magazine. She has always been gracious, funny, and endearing. I said, “You look the same. All the tabloids said you had plastic surgery.” Uma laughed. “I’m waiting for my first face lift! I can’t wait!” She added: “That night, it was make up. I let the stylist try something. It photographed that way.”

I sat next to Phylicia Rashad at the screening. I asked her, “Are we still friends?” “Yes,” she insisted. Has she spoken to Bill Cosby lately? “You know we’re not going to go there,” said with a sly smile. We talked about her role she shot in “Creed,” the “Rocky” movie directed by Ryan Coogler about Apollo Creed’s grandson. “I had a great time,” Phylicia advised me. “You’re going to love it.”

She loved “I’ll See You in My Dreams,” as did the audience which included Rhea Perlman and Danny DeVito, Bob and Lynn Balaban, Sam Elliot–the great cowboy actor who rarely comes to New York, the aforementioned Lucy Simon and husband David Levine, Rutanya Alda, and theater producer/former rock journo Lorraine Alterman Boyle (also the widow of the great Peter Boyle).

Earlier in the day  Candice Bergen hosted a lunch for Blythe Danner and Sam Elliot at Le Cirque, no less. Blythe’s director son Jake Paltrow was there with pregnant wife photographer Taryn Simon. You know this was all a big deal because the wonderful and legendary Liz Smith was right at the main table, along with famed book agent and former publisher Joni Evans.

I was disappointed, though: the invite promised Katharine Ross, wife of Sam Elliot for 31 years, my movie crush from “Butch Cassidy and the Sundance Kid” and “The Graduate.” The Elliots live in Malibu on the beach, they have a grown daughter, and stay out of the limelight. Where was Katharine? “Our dog is very ill,” Sam said. “Katharine is so attached to him. She loves him, and couldn’t leave him.” He promised to bring her to New York in August when he returns to promote “Grandma” with Lily Tomlin.

Oh wait– I buried the headline. Sam turned down the Craig T. Nelson role in “Grace and Frankie.” What happened? “it was too silly,” he said. “And Craig did it just right. When Jane Fonda saw me in this, she understood.” (When you see Nelson Ambien sleep walk, you’ll see what he means.)

One more thing– you think all celebrities know each other. They don’t! After all this time, Candice Bergen and Blythe Danner are just nodding acquaintances. At lunch, Candy toasted Blythe, who plugged Bergen’s latest book. They may become friends. Peggy Siegal put them together, and they agreed it was a good idea.

Do see “I’ll See You in My Dreams.” It was written and directed by a young guy, Brett Haley, who avoids cliches in this Sundance selection. Danner, Elliot, and all the actors give honest, restrained performances that really resonate and hit home. In other words, you’ll like it, and there are no cartoon characters involved.