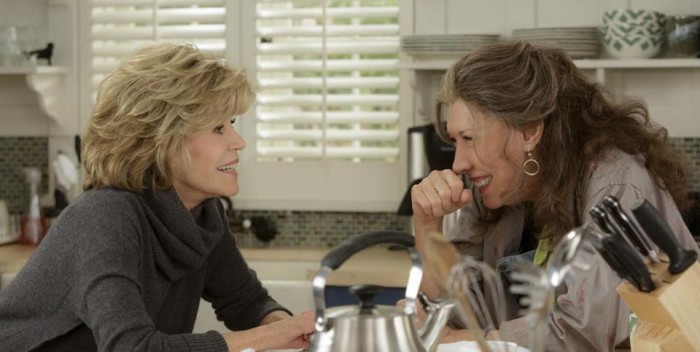 Maybe you’ve already started watching “Grace and Frankie” on Netflix. The first two episodes are rocky, but set up the premise: in wealthy San Diego, Martha Stewart-like cosmetics queen Grace (Jane Fonda) is married to Robert (Martin Sheen). He’s a lawyer, partnered with Sam Waterston’s Sol, who’s married to Frankie (Lily Tomlin). The latter couple are hippy-dippy, compared to society couple Grace and Robert. We find out that after 40 years of marriage, the two men have been in love for the last twenty. They’re divorcing Grace and Frankie, and getting married.

The four principals are wonderful, all award worthy. But since it’s about the women, let’s be clear: Lily Tomlin is a force of nature beyond and above. She’s a Cheshire cat and “ET” all rolled into one. If you could bottle her, the whole world would smell like jasmine and hyacinth and never stop smiling. Jane Fonda, our great American actress before Meryl Streep, is not only impossibly gorgeous and sexy but also brilliant at conveying brittle vulnerability while still being funny or sarcastic. This work is equal to her best on film.

Those first two episodes are clunky because they have to lay a lot out. It isn’t until episode 3, “The Dinner,” and 4, “The Funeral,” that it all comes together. The premise is still there, but the training wheels are off and we’re riding without assistance. The men’s roles are fine, if a little disconcerting: it takes few minutes to accept Jack McCoy from “Law & Order” acting goofy and making out with tough guy Sheen. But they’re sweet together and after a while you accept them.

So the men are set up in their roles. But the show is about Grace and Frankie, who decide to live together in a mutually owned million dollar beach house in La Jolla (the reasoning for this is a speed bump, get over it). All the homes featured are Architectural Digest, by the way. There’s no end of money, so that clears a lot of obstacles. And Frankie’s adopted son Nwabudike “Bud” (Baron Vaughn) is the only black person they all seem to know, and he’s a preppy lawyer at Sol’s firm.

There are four adult children. Frankie and Sol also have Coyote, who’s a jaunt recovering drug addict (the way they are on TV) played by Ethan Embry. Grace and Robert have two daughters played by Brooklyn Decker (who’s better than you’d think) and June Diane Raphael, who’s so good they’re already writing her like she’s leaving for a spin off. All the kids are kind of in an updated version of “thirtysomething” or “Brothers and Sisters” that feels like it’s been added to the main story for demographic purposes.

“Grace and Frankie” is not a sitcom. It’s a dramedy. Netflix has no commercials, and these episodes are 30 minutes long. With commercials, the show would be an hour. So really, it’s an hour long comedy without a laugh track or put downs, paced like a drama in that the actors are really speaking words that must be listened to. And you must listen because the dialogue– particularly among the four elders– is sharp, and layered with nuance. Plus, the delivery of it is demanded by the actors.

So I get back to the actors. Just as with Streep, if you want to see how it’s done, watch Jane Fonda. You won’t be able to figure it out exactly, because she does not share the recipe. It’s in her eyes. In “The Funeral,” she reunites with Sheen’s sister, played by Christine Lahti. Grace is so happy to see her, until she realizes that she is no longer part of her ex’s family. Watch Fonda accept Lahti’s news that even though Aunt Grace is missed by her in laws, she isn’t welcome at family functions anymore. Fonda is like a firefly. The viewer is gutted for Grace, but Fonda doesn’t let Lahti see it. This scene says more about Grace’s downfall than anything else– she’s not only lost her husband, but a family she didn’t realize she liked being attached to.

The characters are peeled back like onions. Rather than front load information, creators Marta Kauffman and Howard Morris drop factoids in that are like cherry bombs. Grace moves on fast, with a rebound boyfriend (Craig T. Nelson). Frankie has a harder time accepting Sol is gone. Tomlin makes the most of this, relaying Frankie’s struggle tenderly, but with a bite.

Is the show funny? Yes, very. Sometimes I laughed out loud, but there’s no rim shot or laugh track so unless you pause the video you have to keep moving along. It’s written (a lot of it by Alexa Junge, although I wonder if Tomlin’s brilliant partner Jane Wagner didn’t help out) like a Nora Ephron or Nancy Meyers movie: smart, snappy, sarcastic, droll. Is “Grace and Frankie” subversive enough for Netflix? Yes, in that as a comedy it eschews all the lazy, easy gimmicks of network sitcoms. By the end of 13 episodes, you just want more and more of these people.

I can’t wait for a second season.