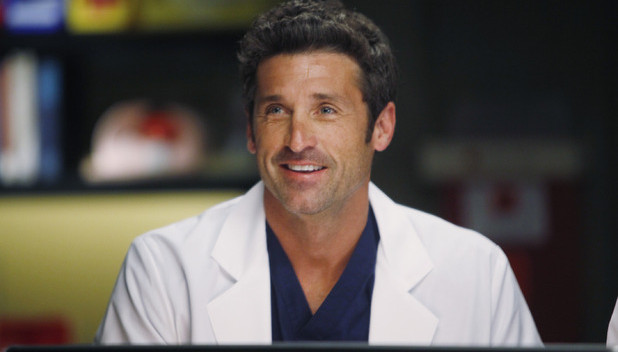 UPDATE The numbers were LOWER than previously thought– 2.1 in the demo, and 7.74 million total. In the finale next week, Meredith wakes up with pizza boxes spread all over  the bed and tells Derek, “I had a terrible dream after we ate all that pizza”– a reference to his famous Pizza Boy movie– “but you’re right here.”

EARLIER Yikes. The “Grey’s Anatomy” fans do not like the absence of Patrick Dempsey at all. Last night’s episode saw another drop in the ratings. The key demo is now 2.2, down from the previous week’s 2.5 in a big way. It was 2.8 the prior week, when Shonda Rhimes plowed an 18 wheeler into Derek Shepherd’s Porsche SUV.

Last week, the total viewers for “Greys” was 8.68 million. This week, only 7.88 million showed. Around a million “Grey’s”
fans either watched “The Big Bang Theory” season finale, which was number 1 and huge, or took a bike ride. Next week’s two hour season finale will really show what “Grey’s” can look forward to next season. The show was renewed for another season last night by ABC.

But I would guess the series finale is in the works for next year. Dempsey must be getting a kick out of this.