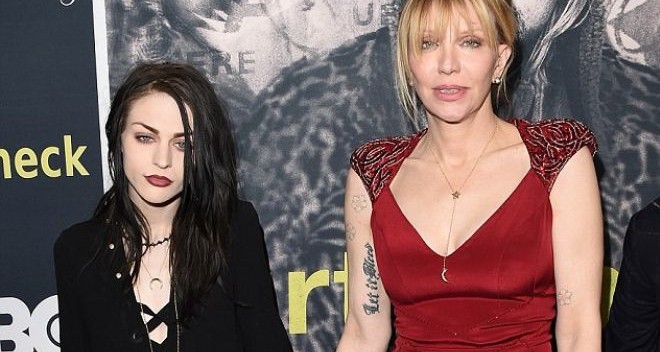 Frances Bean Cobain made a rare public appearance last week at the Egyptian Theater in Hollywood for Brett Morgen’s compelling and haunting documentary, about France’s late father, “Kurt Cobain: Montage of Heck.” The film shows this week in New York and L.A., and on HBO on May 4th.

Cobain, lead singer of Nirvana, famously killed himself in 1994 when Frances, his only child, was only 20 months old. At the Egyptian, Frances, a visual artist, took the stage in a Goth outfit–to the director’s surprise– after Morgen spoke to the audience. She eloquently told the crowd that, “When I first met Brett, I told him to do what he was going to do as a filmmaker, but to keep it honest. That trust and respect is priceless. This was a serious labor of love for him; it’s been eight years. That’s why I wanted to come up here. I thought I’d only see it once, but I’ve seen in six times. There are extremely dark parts, but this does provide Nirvana fans all over the world, about who he was without the romanticism. I didn’t know Kurt, but I feel he would have been proud of this film.”

At the after party I asked Morgen how he approached this weighty subject and all that goes with it.

“When I went into this film, I figured that it would be all Kurt, that there wouldn’t be interviews with anybody else,” the director said. “I realized I couldn’t do that, with the exception of Rolling Stone’s David Fricke’s interview, which runs through the movie. But in all the others, he was too distant. I kind of freaked out. I called my line producer and said how much money did we spend already? Cause I wanted to give the money back, it was six and a half years into the project. I wanted to stop it. I didn’t think we could do the film the way I envisioned it. I never experienced this as a filmmaker. It was a really tough time, because I was so into it. I was at a loss, I didn’t know how to make the film. Then I started to talk to the people in his life and it all came together.“

I told him he looked surprised when he saw Frances come up to the podium.

Brett replied, “I had no idea that Frances wanted to speak. Frances agreed from the beginning that she would take one picture backstage at the premiere of the film. That was her only obligation. Since she saw the film, within 10 minutes she tweeted it out and has been completely supportive ever since. When I first met Frances she took my hand and said, “ I just met you, but I already know you more than I know my father.” This film has been cathartic and therapeutic for both Frances and [her mother] Courtney [Love], and the relationship between them even with Frances and her father.”

I asked him what the biggest surprise for him was as a filmmaker?

He answered, “I had no idea at any point in making this film that Kurt connected with as many people around the globe than he did. That has been absolutely humbling. It’s a pretty aggressive movie and I thought it would be polarizing. But the response has been beyond what I ever expected. You make a movie like ‘The Avengers,’ and the film opens and you high five each other and drink champagne. You can’t celebrate with this. There is a pall of sadness that hangs over it. I’ve spent four months traveling with this film and every time the movie is over, people are quiet. As a filmmaker, when the credits come up people are just stunned.”