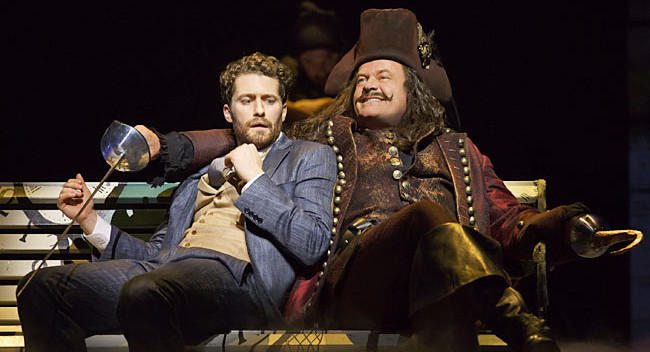 The good news, and there’s plenty of it: Matthew Morrison is like a real life Peter Pan as he makes a Glee-ful return to Broadway with legions of fans following him. Laura Michelle Kelly is luminous as Sylvia Llewellyn Davies, and Kelsey Grammer steals the show alternating between Barrie’s theater producer and a wonderfully hilarious Captain Hook. Finding Neverland turns out to be the three hankie show of the season with a lump in its throat and a tear in the eye.

“FN” is based on the 2003 Oscar nominated movie hat starred Johnny Depp and was directed by Marc Forster. Now Diane Paulus — of “Pippin” and “Hair” fame– reimagines the story of how “Peter Pan” author James M. Barrie was energized by widow Sylvia Davies and her four young boys. Barrie was at a cross roads at his career as London playwright and stuck in an unhappy marriage. Meeting the Davies in the park awakened his inner child, and soon the story of Peter and Captain Hook, et al came to life. Paulus is expert at whimsy, and so her London shivers with confetti blasts, and delights in oversized bicycles, red balloons, and a hallucinatory clock sequence that I want to see again as soon as possible.

Gary Barlow wrote the music in a sort of Beatle-y, Elton John lite motif, with plenty of catchy songs like “When Your Feet Don’t Touch the Ground,” “Better,” “Circus of Your Mind,” and “Believe.” Morrison, Kelly and Grammer are not the only success stories of “Neverland.” Carolee Carmello is splendid as Sylvia’s haughty mother, and the Davies boys that I saw were spot on without being cloying. The boys even have their own clever number –“We’re All Made of Stars” — that proves witty and endearing.

And PS– Morrison has his huge following from “Glee,” but he’s the real thing. He has a beautiful voice with lots of range, and stage presence to spare.