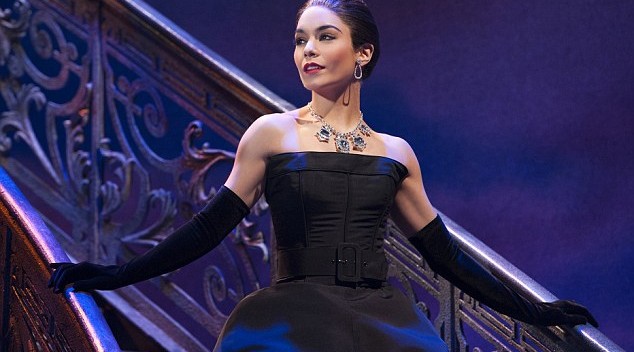 It may be a little hard to explain what’s going on in “Gigi” to the kids in the audience. Disney “High School Musical” star Vanessa Hudgens is very perky, and the whole enterprise could be a Princess story except for one little detail. Right up to the end, Gigi is being negotiated for by rich, young Gaston to be his mistress, not his wife. In the new version that opened on Broadway last night, they try to make light of that. But there’s no mention of a wedding or an engagement for over two hours. It’s all about how much Gigi will get from Gaston to sleep with him.

Maybe that’s why “Gigi” in this version doesn’t quite work or make sense. The sludgy direction tries to play up the Disney aspects with great costumes and sets that could be used, more effectively, for a production of “Hello, Dolly!” It’s the most inoffensive show of the season, all meringue and no mystery. Even the fact that Mamita, Gigi’s grandmother, is a former courtesan is sort of swept aside. She’s just had a lot of past romances. And a lot of good hats.

The real meaning of the new “Gigi” will probably go right over the heads of the little girls in the audience. After all, at the eleventh– really 11:30– hour, Gaston proposes to Gigi, so all that wrangling about his getting her a big apartment and supplying maids and chauffeurs in exchange for sex no longer matters. He’s going to put a ring on it once the curtain is down. (It would more interesting to see the next act.)

Vanessa Hudgens, who used to be part of a tabloid act with Zac Efron, is the linchpin here. She’s a plucky ingenue even though she’s on the small side. Her voice seems like it almost works until it doesn’t. She goes into songs with a lot of energy but has trouble landing them. She seems like she could be a sexy concubine until she doesn’t. I had no idea why Gaston was so interested in her except that she was approximately his height. But this is a fantasy for 13 year old girls.

The outstanding players here are the ‘elders’– Victoria Clark as Gigi’s Mamita, Howard McGillin, looking a little mummified, as the local dandy, and Dee Hoty as Gigi’s haughty aunt. When they’re on stage the show’s pulse picks up. But it’s never racing, trust me. The best number is “I Remember it Well” between Clark and McGillin, done sort of as a lost number from “Follies.” Otherwise, this Lerner & Loewe concoction is memorable mostly for “Thank Heaven for Little Girls,” which in this version has been drained of its lechery.

For opening night, Mary Louise Parker brought her adorable daughter, Ana Gasteyer was in the audience and so was Andrew Rannells, and there were plenty of lovely people in the Neil Simon Theater like the amazing Kristine Nielsen from “Vanya and Sonya and Masha and Spike.” But I did feel sort of sad because “Gigi” succeeded the much better “Last Ship,” Sting’s musical, which was full of passion of fight and meant something important.