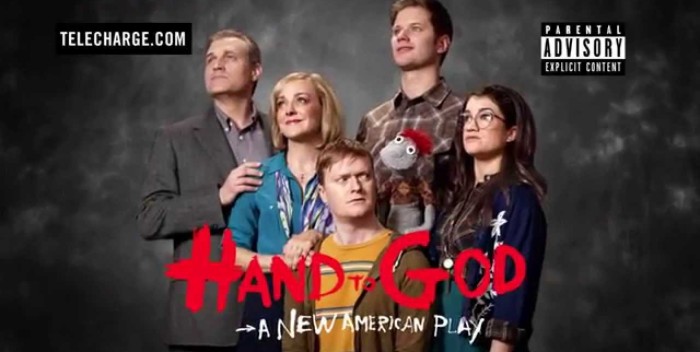 The path to the Tony Award season took a curve last night as Richard Askins’ original play, “Hand to God,” was such a hit that it took everyone by surprise. Most surprised, I think, was playwright Askins, who jumped on stage during the standing ovation at the end of opening and made a very off the cuff, not usually seen speech to the audience.

The gist of it was “I am an American playwright,” and “this is an American play.” At a time when British imports like Peter Morgan’s “The Audience” and Simon Stephens’  “The Curious Incident of the Dog in the Night” are the hits of the pre-Tony season, Askins– from Texas– is an anomaly. Raised in a Christian family, and more recently a bartender in Williamsburg, Brooklyn, Askins is a live wire who realizes he’s written a bit of genius. “Hand to God” is totally original, funny and angry and sad, and sure to leave a mark not only this spring but for some time to come.

To say no one really knew what was coming– can be underscored by the fact that few celebs showed up in the rain for opening night. I saw Andrew Rannells, and Jennifer Westfeldt, Daphne Rubin Vega and producer Jean Doumanian. Let me put it this way: Shubert head Bob Wankel and Nederlander chief James Nederlander Jr. had a lot of time to chat with each other.

But this morning, just wait while publicist Rick Miramontez is fielding calls from famous people who “must” see this show. Steven Boyer, the nominal star, is a very likely Tony nominee. He is just stunning as Jason, the put upon teen son of Margery (also stunning Broadway debut from Geneva Carr) who teaches puppetry at the local church. In her puppet class are Timothy (Michael Oberholtzer) and Jessica  (Sarah Stiles), respectively a sullen good looking kid and a sullen, introverted girl. The church is run by Pastor Greg (the always good Marc Kudisch) who has a thing for Margery.

There is one more character: Tyrone, a blue grey sock puppet worn by Jason. Tyrone is inanimate but he takes on a life of his own. Think Mel Gibson in “The Beaver” if that movie had been any good. At one point Tyrone, operated by Jason, and a female puppet created by Jessica, have quite graphic full on, soup to nuts sex on stage while their humans have a completely separate conversation. The play deserves awards just for this scene. I doubt it can be shown on TV. But it’s a show stopper.

“Hand to God” is hilarious, so don’t think otherwise. But it’s also a full three act (well, two acts) play, with fully realized ideas about religion and mortality, Big Ideas and small ones that are philosophical and mordant. It’s not a glib play, though. Director Moritz von Stuelpnagel very adroitly steers away from clownishness or scenery chewing. He’s got this extraordinary ensemble on a tight leash and never lets up.

The Tony season really gets more clarified now as all these actors, the play, and the director will be a big part of the mix. Boyer is going to be up against Alex Sharp, Bradley Cooper, Nathan Lane and Bill Nighy for Best Actor in a Play at the very least.  And we haven’t even seen “Wolf Hall” yet.