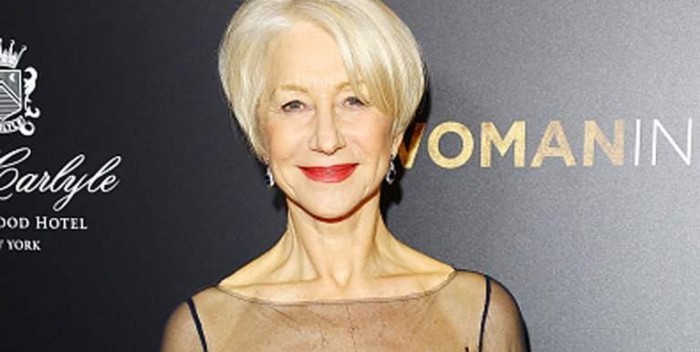 Helen Mirren glittered on the red carpet at the premiere of her new film, “Women in Gold,” at the Museum of Modern Art Monday night. Mirren, who looked svelte, elegant and glamorous, wore a midnight blue Badgley Mischka gown that was sheer at the neck and set off her platinum bob.

Mainly Mirren posed for photos and hugged co-stars. She spoke sparingly to the press to conserve her voice for her six days-a-week Broadway performance as Queen Elizabeth II in “The Audience.” This is just as well since one journalist asked about her hair and make up. In clipped tones Mirren replied, “Only hair and makeup? I say!”

As to a question about what Mirren does when she gets home from red carpet events, she laughed, “I take my shoes off, put my pajamas on, turn on the TV, watch ‘Dance Moms.” Then she bolted downstairs to the screening.

Mirren plays real life-person Jewish refugee Maria Altmann, who sued the Austrian government for the return of her family’s paintings, including the famous Klimt painting of her aunt entitled, “Portrait of Adele Bloch-Bauer.” Altman died at age 94 in 2011 but not before he received justice. The painting was known as Austria’s “Mona Lisa,” and the arduous six-year struggle to return it to its rightful heirs was undertaken with newbie Los Angeles-based attorney E. Randol Schoenberg, whose grandmother was best friends with Altmann.

Schoenberg, who was at last night’s premiere, told me the choice of hunky Ryan Reynolds to portray him on screen was complimentary. “I’m not the sexiest man alive,” the attorney quipped. Schoenberg, who was with his wife and three children, told me the Reynolds got down some of his mannerisms. “He put on the glasses, he talks fast, and he does things like I do and he really becomes me in the movie which is amazing.”

In the film we see Schoenberg, who was just starting out on his career, give up a lucrative job in a law firm to devote himself full time to recovering Altmann’s paintings. It must have taken a certain amount of courage I told him. 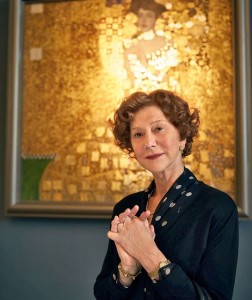 “For me it didn’t seem brave. It seemed like the only thing I could do. Here’s my grandmother’s best friend asking me for help on this unbelievable case with these incredible paintings and these amazing facts about the Nazis and everything. How could I not work on that, right? That seemed just something I couldn’t let go. And so I did, I left the firm. I did tell my wife before. That’s a little bit different than the movie,” he laughed. “But she was very supportive. We figured out there was no good time to do something like this.”

As to what he hopes audiences will take away form the film, Schoenberg told me, “The movie is about memory. It’s about remembering the past. And in a way it’s an entrée into this whole history of the Holocaust and also the culture in Vienna. These two very important things and so I think if we can get a wide audience of people to rediscover or discover those two things I think it’s a win, right? It’s worthwhile.”

One of the provocative aspects of the painting is conjecture that Klimt may have had an affair with Adele, who died at age 43 of meningitis. Klimt was a womanizer who had 14 to 18 illegitimate children and painted in a long smock with nothing underneath. When I asked Schoenberg about rumors Adele and Klimt had an affair, he told me Maria asked her mother this very question and she told Maria, “Of course not, it was an intellectual friendship.’ And then Maria said, ‘But she would have said that anyway even if it wasn’t.’’

Schoenberg doesn’t buy the affair theory, adding that an art dealer told him that although Klimt fooled around with all his models he didn’t mess around with the wives of his wealthy patrons. “There was probably flirtation, but I doubt he really went there. I mean there were two portraits, not just one, right? So he wouldn’t burn his bridges I think with his customers,” he told me. “These Jewish families were his main supports, so I don’t think so, but who knows? Anything’s possible.”

Director Simon Curtis stuck to a discussion of the film on the red carpet. The “My Week With Marilyn” director – who is married to Elizabeth McGovern of “Downton Abbey” – told me he’s drawn to portraying complicated women on screen. “I think it was amazing to see that most women of that age are either grandmothers in small parts and this is a woman who drove this film. It’s a true story and powerful for that reason.”

This isn’t the first time he has worked with Helen Mirren? “No, I was her tea boy back in my youth,” he laughed. “That was harder.”

As for what he hoped people would come away with in the film: “These stories are important and we’re very lucky living where we now live and we should remember some of the stories of the past. It was a film that was mostly set in the contemporary or near contemporary world and that we shouldn’t forget some of the terrible things that happened in the 20th Century.”

Curtis went on to tell me the story personally resonated with him, that his family is Jewish and emigrated to the U.K. before World War II. The German silver cup you see in the film as part of the Nazis’ plunder, actually belonged to his Polish great-grandfather.

Max Irons, who plays Maria Altmann’s young husband, Fritz, in the film, told me that working on the film was a stunning experience. “You come to the set every day sort of bleary eyed at 6 a.m. and there was a big road in Vienna. We saw all the swastikas and there was a big parade of Nazis and vehicles. It was horrifying! It was really quite shocking to the system. You see these images time and time again in photographs but to be two-dimensionally in that environment even though it was artificial was very, very strange.”

Although he had no scenes with Mirren, the 29 year-old actor told me, “She’s wonderful. I would ask my driver every day going to set, I would say, ‘Is Helen on set? You need to tell me, I can’t be surprised by this. I need to know.’ And there was the day she said yes, Helen’s there. ‘Is she in the make up trailer?’ And I was sort of expecting to meet the Queen. I was virtually prepared to courtesy. But then you meet this woman who is kind, and warm and self-deprecating, I was so surprised,” he laughed. “It’s what you hope for with people like that.”

Katie Holmes, dazzling in a pink Zac Posen dress, was the last person on the red carpet, and her publicist told journalists to make the questions “relevant.” She has only one scene with Helen Mirren in the film and Holmes enthused, “I want to work with her more. I just love her so much. I’m such a fan of hers.”

After the screening, guests streamed to the Ronald S. Lauder’s Neue Galerie on East 86th Street and Fifth Avenue where the Klimt portrait, “Woman in Gold” is on permanent display.

“Nothing prepares you for how magnificent it is in person,” Simon Curtis mused.

I caught up with Peter Altmann, one of Maria Altmann’s three sons, in a small room next to the famous portrait, that was devoted to a time line of Klimt’s life and the story of his mother’s fight for the return of her stolen property from the Austrians. He said the movie mainly got events right but details had been changed.

Maria Altmann’s son told me the escape of his parents from Austria was not as exciting as depicted in the film, where they flew by Nazis and evaded capture by way of a thrilling car chase and airplane escape; they actually had friends who escorted them over the border. He also laughed that his father, Fritz, an opera singer who never made it big, might not appreciate the evening as much as he did. “He always liked being the center of attention.” Peter Altmann also smiled and confirmed to me that Maria’s aunt Adele, the goddess of the masterpiece, was not as loving towards her niece as portrayed in the movie. He said the movie captured the spirit of the story, which was what counted. “Woman in Gold” opens Wednesday.