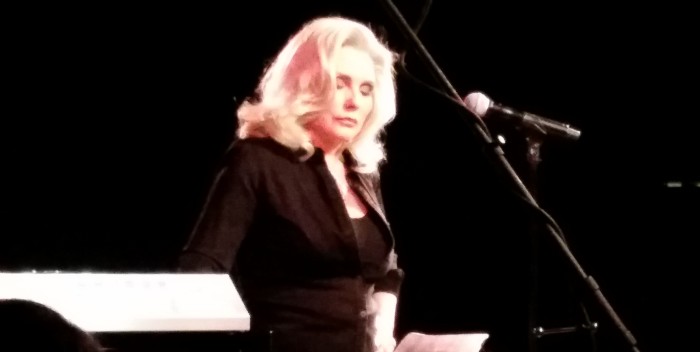 Debbie Harry, aka Deborah Harry, is going to be 70 years old on July 1st. She could teach a thing or two to Madonna, who’ll be 57 this summer, about aging gracefully and still appealing to fans of all ages.

Last night, Debbie opened her first ever cabaret stint at the Cafe Carlyle, legendary home of the late Bobby Short and Elaine Stritch (and where the cheesecake melts in your mouth). The frontwoman for Blondie appeared only with a keyboardist/programmer/guitarist named Matt Katz-Bohen, who works on and off with Blondie. Debbie, with those stunning cheek bones and a full mane of blonde hair, wore a simple long back skirt, pleated, and a chic black jacket. Otherwise it was just her voice, and the smallest room she’s worked in since CBGB back in the day.

The trick to Debbie’s set, which excluded all Blondie hits, was a repertoire of songs pulled from later, less well known solo albums and the last, forgotten Blondie CD (which was excellent but murdered by its distributor). Her dreamy, ethereal voice, which sometimes finds unexpected deepness, was in fine form.  So was the singer, who has a natural nonchalance, and quick irreverence. With so many hits and many cult followings, Debbie Harry has nothing to prove. And yet she proved a lot.

Debbie is an astute curator of songs. She offered a couple of her minor solo hits– “French Kissing in the USA” and “In Love with Love,” as well as “Strike Me Pink” (which someone should cover again– it’s a really good single). Did you know “French Kissing” was written by TV Producer Chuck Lorre when he was known as Chuck Levine? Really.

She told the audience, “We’ve been rehearsing a lot, I’m a little rough around the edges.” Nonsense. Harry has a nice, effortless quality that will serve her well during her Carlyle run. I wouldn’t mind going back in a few days to see how she’s doing. I really enjoyed a song called “Kiss and Tell,” and another one called “Lucky Jim,” which she explained was not named for Kingsley Amis’s novel. There was also a clever and poignant medley of “I Cover the Waterfront” mashed up with Moby’s “New York, New York.”

Harry stayed away from Blondie, although I might suggest one or two songs from that catalog. Julia Fordham recently turned “Call Me” into a slow jazz number; Harry could try it. And “Sunday Girl” seems like the perfect cabaret song. But it’s her choice, and she could teach a few things to Madonna– whom she preceded by many years as the Queen of Downtown music–how to age and get away with it: Keep it simple, and aim to your peers. Debbie Harry sings and speaks from a reality and honesty; you get it right away. There’s no artifice. I’ll bet we hear an album connected to this show in the near future. It would be welcome.