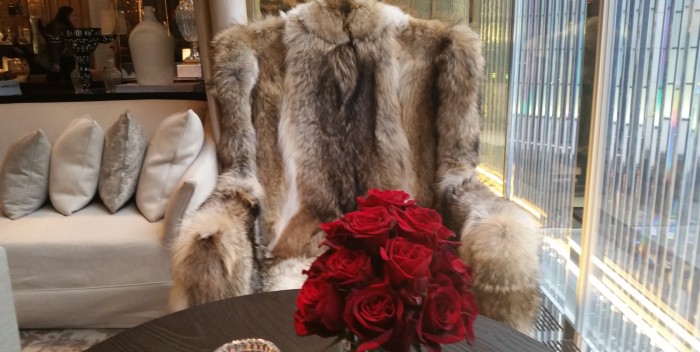 Is it 1985 all over again? Luxe is back in Manhattan, the over the top gross kind that led to the 1987 stock market crash and a whole re-thinking of our lives.

Luxe is certainly back at the new Baccarat Hotel, into which I stumbled yesterday. Owned by the people who make the crystal, this amazing ode to opulence features $20 million in Baccarat crystal chandeliers and other pieces.

But what stands out in the massive lounge and lobby area on the second floor are a dozen or chairs covered in coyote. I do not mean faux coyote. I mean, real coyote pelts, whole ones, like you’re sitting on a full sized coyote’s fur.

Creepy? Yes. And not just because of animal rights. First of all while the pelts are soft, the chairs are hard. It’s not so comfortable. Second, yes, ok, the idea of sitting on a murdered animal in this way is even different than, say, sitting on a leather couch. Leather is at least processed and tooled, tanned, etc. This is really like sitting on an animal sans his body.

I asked someone who worked for the hotel about this. “Well, coyotes aren’t so nice,” he said.

In the bar, where the gigantic Baccarat chandeliers hang, I asked a woman who was sitting with friends what she thought about all this. She told me that Baccarat is going to open another hotel in Manhattan “that’s all green, and very PC. This one, though, I imagine that PETA is coming any minute.”

The Baccarat Hotel is on West 53rd St. between Fifth and Sixth Avenues. It has a recessed entrance, and a fire burning next to its door in a set back window. There’s no name, and no flags. The smallest rooms start at $814.

The real affront is that the hotel took the place of the 53rd Street Library, a popular branch of the NYPL. Under an agreement with the city, Baccarat is adding a tiny version of the old branch downstairs and next door.

Meanwhile upstairs, they’re serving a two ounce glass of Macallan M single malt scotch for $900– Nine hundred dollars, yes. So far, says the bartender, no one’s ordered it. But the hotel has only been open one week.

Just the idea of someone sipping a $900 drink on a dead coyote is hilarious and awful and completely detestable. And that this replaced a building of ideas makes it all the worse. But this is what life was like in the mid 80s. People have short memories.