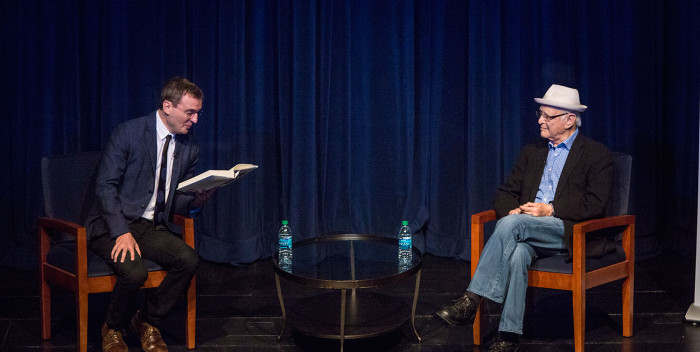 Norman Lear truly believes the show must go on. Even though he had the feeling of approaching pneumonia, the 92 year old legend showed up last week for The Writers Bloc ‘Arts & Ideas: Conversations at the Wallis’ in Beverly Hills. He chatted with his good friend, Phil Rosenthal, writer/producer/director ‘Everybody Loves Raymond.” Lear was hawking his new book, ‘Even This I Get To Experience.” The Writers Bloc always attracts the crème de la crème of authors of current books and the Wallis Annenberg Center For The Performing Arts, aka The Wallis, is swiftly becoming a must go destination for the most talked about cultural events.

The cleverness started at the get go. Lear asked Rosenthal, “Please tell the audience why my voice sounds so weird.” Phil responded, “I’m going to guess cause you’re really old?” Norman then playfully walked off. To which Phil commented, “The guy has pre-pneumonia but still lives to do shtick.”

The talk was current; Brian Williams’s recent troubles came up. Lear commented, “Of course his hand had to be slapped, but the press made too much of a fuss about it. We all exaggerate occasionally.” He then brought up his disgust for the 47 senators who recently wrote that letter to Iran, and added, “I would vote for Jon Stewart for President.” Rosenthal noted that Archie Bunker’s bigotry “is still alive and well on that bus in Oklahoma.”

The duo switched gears and Lear recalled his difficult childhood days. His father was in prison for a time, they were dirt poor and he lived with his grandparents. A standout experience from his early career was meeting Charlie Chaplin, who performed a mime just for him.

Cut to ‘All In The Family,’ and the challenges, both positive and negative, that entailed. Lear told how the pilot was almost not picked up, because although they had Carroll O’Connor and Jean Stapleton, the daughter and her husband did not work so well. So Lear cast two other actors, including his longtime friend Carl Reiner’s yet-untested son Rob. He explained, “I take credit for casting those four actors, but the way they interacted was in the lap of God.”

Lear’s other famed shows were discussed, as well as his other noted work and his honored political life. Lear summed it up by saying, “I take life seriously, so much of it is glorious. I see life through the end of telescope with humor.” I caught up with Rosenthal after who told me that, “I think life in America can be measured BN and AN, before Norman and after Norman. “ Phil then quipped, “I wouldn’t be here without him, so I really should thank him for my house.”