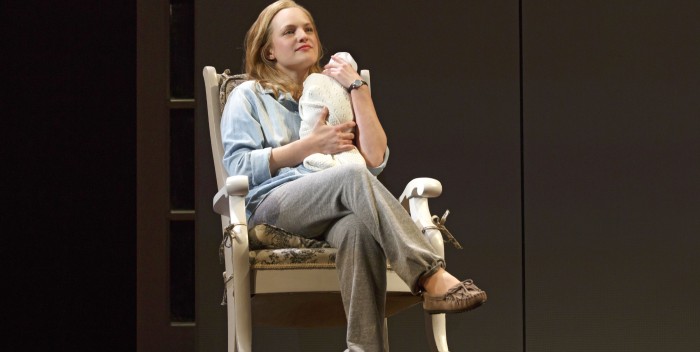 Wendy Wasserstein’s deep and funny 1989 play “The Heidi Chronicles” opened last night on Broadway to cheers and raves, with “Mad Men” star Elisabeth Moss brilliantly picking up the role originated by the great Joan Allen. And what a crowd: Renee Fleming sat in front of me, and Jane Seymour was behind me. “Mad Men” creator Matt Weiner and star John Slattery were there, as were the glowing Patricia Clarkson, Alessandro Nivola, and a score of other notables.

So: it’s freezing out, and there’s no transportation to the Red Eye Grill some ten or more blocks away. All the shows have let out at the same time including the “Heidi” premiere, so 8th Avenue was filled with patrons of other shows scrambling for cabs. What to do?

All of a sudden this large white vehicle with many huge windows arrived in the middle of the block. The door opened and other people lined up to get on. “Look, it’s a bus,” someone said. “Should we take it? Do you have that thing?”

“Do you mean a MetroCard?” someone replied. The group stared at this white alien machine as if it had landed from a Marvel comic movie.

One or two MetroCards were fished out from wallet and handbags, and, en masse, the “Heidi” party boarded. Regular customers of the M106 shifted over as our group embarked, including B52s star Kate Pierson, famed comedian Robert Klein, Tony winning costumer designer (and head of the American Theater Wing) William Ivey Long, and another dozen denizens of the live stage.

“How much is this bus ride?” someone who did not have a MetroCard asked. I answered, “two-fifty,” as I’d generously swiped for Kate Pierson, as a thank you for three decades of “Rock Lobster’ and “Private Idaho.”

“Two fifty!” Many were shocked. The last time they’d been on public transportation it had cost around twenty five cents.

“Stay here, the party’s better,” said a woman in a seat by the door as we landed on West 56th and Eighth, the “Patsy’s” sign glowing neon in the dark.

But the party at the Red Eye Grill was pretty good after our adventure. It was crowded, but the food was fine, and producer Jeffrey Richards, who is also bringing “Wolf Hall” parts 1 and 2, to Broadway, next week, was pleased with the reviews and the reactions. “How about Elisabeth Moss?” he said. “She’s the real thing.”

He’s right. She couldn’t be better as Heidi Holland, the art historian who comes of age in 1968 as the women’s movement starts up. She wants it all — career, family, love, friends– but only can have some of it. By the mid 80s, when the play ends, she’s grown and so have we. Jason Biggs and Bryce Pinkham are excellent as Heidi’s not-boyfriends. The whole cast resonates, especially newcomer Ali Ahn as Heidi’s career driven super-woman pal Susan. Susan says toward the end of the play when she and Heidi reunite, “I do miss the Heidi chronicles,” and I’ll tell you what: I did too.