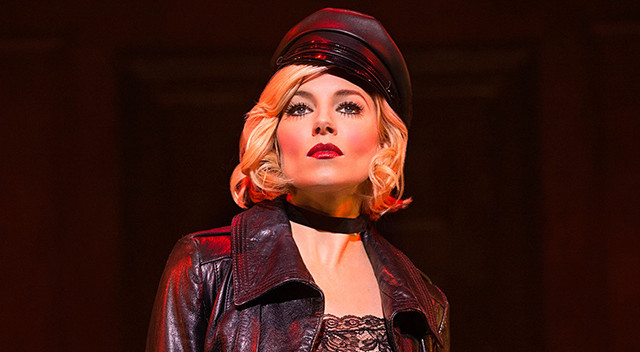 Sienna Miller is killing it in “Cabaret” on Broadway. She’s also trying not to get killed. So far, in the last 10 days, she tells me, she’s smashed into a wall and gotten stitches over her right eye. Last night (Tuesday) she got clocked by the actor who plays her lover in the hit musical now winding down at Studio 54 for Roundabout Theater.

Not only that: on Tuesday, Miller–a trouper–was suffering from bronchitis and taking steroids to get better. The raspiness in her voice actually gave her a young Marianne Faithfull sound, which worked for the well known songs from the Kander and Ebb musical.

The good news is that Sienna, who’s had a big year with roles in “Foxcatcher” and “American Sniper,” has really come into her own. “Cabaret” is not her Broadway debut– that was in “After Miss Julie” in 2009. But it’s her breakthrough performance. She’s gotten rave reviews, deservedly.

As Sally Bowles, she ranges from waifish to hardened, just as the play and book would indicate. She’s not attempting Liza Minnelli in the Big Screen version. But after the late Natasha Richardson years ago, then Michelle Williams and Emma Stone, of whom did very well, Miller is bringing something new to Sally and to “Cabaret.” There are only 15 performances left. Try and see it if you can.

I’ve watched Sienna Miller since she first took hold, got involved in a prolonged tabloid adventure with Jude Law, and grew until she is now a mom and a soaring serious actress. It’s gratifying to see her career take the right paths . On stage she glows like a movie star even though she’s hunkered down for real theater work. She may even return in spring 2016 with something. For now, though, watch summon everyone to the Cabaret, which is not the place you might think. It’s a treat.