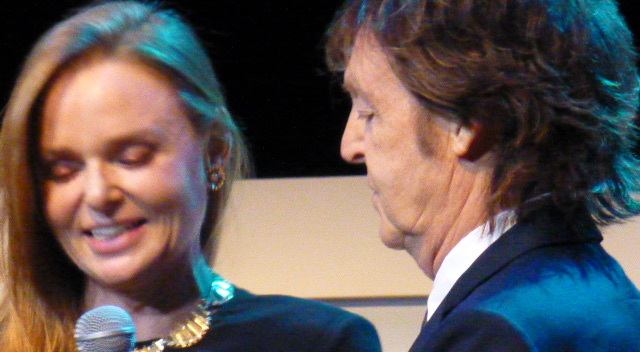 Heather Mills is such a cow that she had to slag Paul McCartney last week to get attention. Otherwise, she’s just the answer to a trivia question. I thought we’d never hear her name again.

A couple of things about dear Heather that I recall. I met her a few times with Paul, before and after they married. During their engagement the couple turned up at a small press event for something or other at what was briefly the hottest club in New York– called Moomba.

Heather was accompanied by her sister, Fiona, a small, compact woman with a good sense of humor. I asked Heather what her favorite Beatle song was. Her reply: “I don’t have one, I don’t know them. Maybe Blackbird.”

Fiona let out a shriek. “Can you believe it? She doesn’t know any Beatle songs? What’s wrong with her?”

Heather then told me she was a huge fan of Colin Hay and Men at Work. This was long after “Who Can it Be Now” and “Down Under” stormed the charts. Colin Hay, I responded? Are you kidding? She went on and on, and told me she’d even taken Paul to a Colin Hay show.

Poor Heather. She didn’t care about Paul, much less the Beatles. Her whole purpose in that marriage was to use McCartney as a stepping stone. She thought she’d wind up being beloved UN ambassador or some kind of celebrity. Instead, everyone hated her. Now she can’t keep her big mouth shut.

Heather, all anyone was interested in was Paul and the Beatles, dear. And they still are.