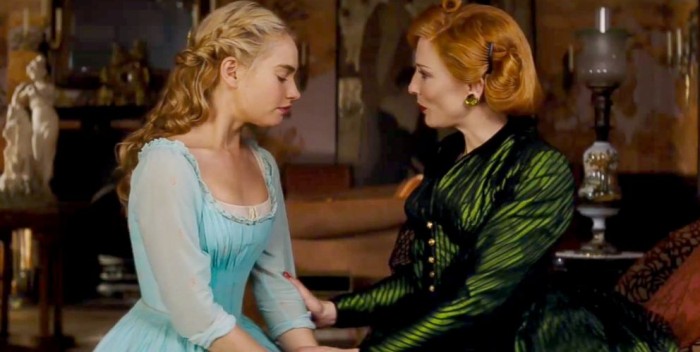 Kenneth Branagh’s “Cinderella” is a whimsical, inventive, delightful and tons of fun movie going experience for all; from the multitudes of tiara and princess wearing little girls, to the adults that accompany them. Branagh’s is a faithful adaption, with some touches of enchanting surprises. The sumptuously stunning visuals with a fine cast, all enhance this classic fairy tale.

Lily James, Lady Rose on Downton Abbey, is a lovely and truly appealing Cinderella. Richard Madden plays the dreamy prince with a sweet sincerity. The film starts with Cinderella quickly losing both her mother, the always terrific Hayley Atwell, and her father, the equally able Ben Chaplin.

But to make matters worse, to say the least, her father stupidly married the evil Lady Tremaine, played by Cate Blanchett, who comes with two dithering daughters, comically well played by (“Downton Abbey” star) Sophie McShera and Holliday Grainger. Blanchett, natch, steals every scene she is gloriously in. Her villainy is a feast to watch. Stellan Skarsgard as the Grand Duke, Derek Jacobi as the kind King and Helena Bonham Carter as the Fairy Godmother, are all in fine form.

This Magic Kingdom is a politically correct one, with Africans, Latins and Asians. The Prince’s right hand man is played wonderfully by the black actor Nonso Anozie. The make up, hair, sets and costumes are all rich, elegant and extraordinary. Branagh’s Shakespearean skills have made this telling of “Cinderella,” a classic for the ages.