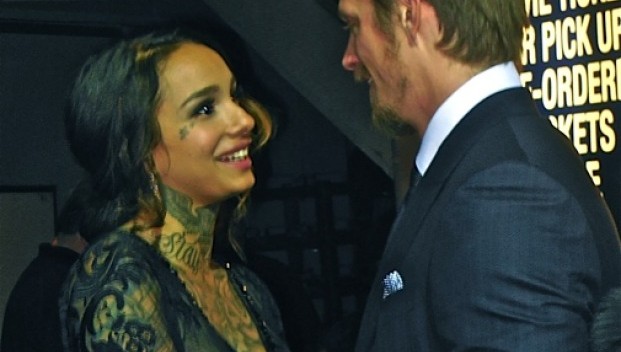 These days, Liam Neeson is usually saving/avenging a daughter and shooting a lot of people in the process. In “Run All Night,” this time it’s a son. Gotta mix it up.

But it was tattooed beauty Cleo Wattenstrom, who is Kinnaman’s girlfriend, who was the center of the attention. The Swedish tattoo artist and actress wore a sheer gown that plunged nearly to her waist and was cut very low in the back to display colorful and intricate tattoos that covered nearly every area of exposed flesh.

“Run All Night” doesn’t disappoint as a fast-paced thriller with bone crushing fight scenes, thrilling car chases and characters trying to outrun assassins. The story revolves around two longtime best friends, who have both seen better days. Shawn Maguire (Harris) is Brooklyn mobster trying to retire and Jimmy Conlon (Neeson) is his former hit man, once known as “The Gravedigger,” who now haunted by memories of his past which he tries to drown out with booze. He’s estranged from his son who wants nothing to do with his mobster father. Whatever they pay Neeson he’s worth it; he adds gravitas and intensity to every scene he’s in and makes the familiar storyline work.

Neeson has a worthy actor to face off with in Harris, whose scenes together are the best part of the film, apart from the terrific action scenes, which never let up. You know as soon as he says, “I’m too old for this s…t,” he’s about to demolish a dozen baddies. Neeson’s character pulls himself together to try to save his son, who witnesses a murder committed by Maguire’s only son, a druggie who gets involved in a drug scheme gone wrong. The film becomes a father-son saga with many issues to work through and to forgive. But for one long night they work as a team to try to outsmart and outrun Maguire’s army of henchmen, along with the cop (Vincent D’Onofrio), who’s been trying to put Jimmy away for the past three decades.

Common, fresh from his Oscar win for his song “Glory” from “Selma,” plays Mr. Price, the assassin who says he would kill Mike just for the joy of it. Common is unrecognizable in his role as a hit man obsessed with killing both father and son. On the red carpet I asked Common how he got into the head of such a brutal character. “I tried to zone in,” he told me. “ I was happy to be a part of it with Liam Neeson. I knew that I wanted to go to that dark place and I did it. I just gave my all.” He added, “It was definitely heavy training cause you’re fighting against one of the best, one of the greatest to ever do it, Liam Neeson, so for me to go toe to toe with him, man to man, I had to go through the training and the process because he has the experiences that I don’t have but it was fun. My character Price definitely challenges him.”

Kinnaman, who has a Swedish accent he manages to disguise in his screen work, raved about playing opposite Liam Neeson. “It was a great honor to play with Liam, to play his son. It was a really great time. He’s a really sweet and gentle man that’s very generous, no ego and he’s got a great sense of humor, so it’s really easy.”

(Neither Neeson nor Harris was made available for quotes, so we don’t know what they thought.)

The Swedish actor has a bunch of action thrillers coming out soon. “What’s coming is going to be even more intense,” he promised. He said he likes to mix it up in his acting choices. “The people who watch the films that I’ve done, I think they can appreciate that I try to do,” he said. “I don’t try to stick with one thing and for me that is what I aspire to do, which is to do as different roles as possible.”

After his last interview, he actor rushed over to Wattenstrom, who was at the edge of the red carpet and gave her a passionate Hollywood-type smooch, and then the exotic couple walked hand in hand into the theater.