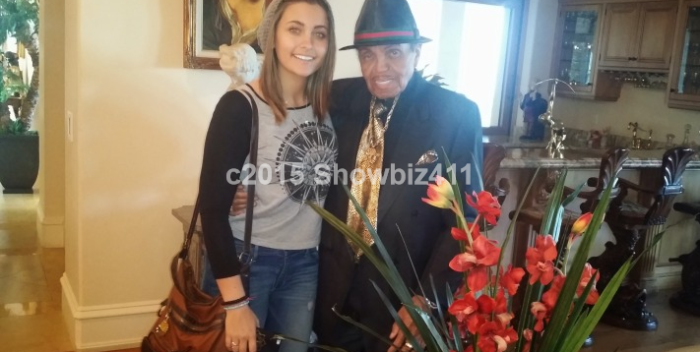 EXCLUSIVE Paris Jackson is home. My sources tell me that Michael Jackson’s teenage daughter is back with her family in Calabasas, California after almost two years. In June 2013 Paris– who’d been a feisty, funny kid on Twitter, and had stood up for her grandmother against forces in their family– had emotional problems. There was talk that she’d attempted suicide. Her family moved quickly, and sent her to a boarding school in Utah so she could properly mourn her father and gain skills for coping with grief and fame.

And now, Voila!, Paris is home. She was visited recently by grandpa Joe Jackson, the Wily Coyote of the Jackson family. A source sent me some pictures, one of which I have reproduced here. Paris had wanted to leave the Utah school and come home for a while, sources say. It’s unclear if she will return to Buckley Hall or finish high school at another private school in the area. I am told that “she wants to help people, that’s what she wants to do with her life.” Which is a lot better than being a professional celebrity. And look at the pic– she’s smiling, tall, and beautiful. A happy ending, to be sure.

Welcome home, Paris. And may the paparazzi, as well as the press, leave you alone. You deserve some privacy.