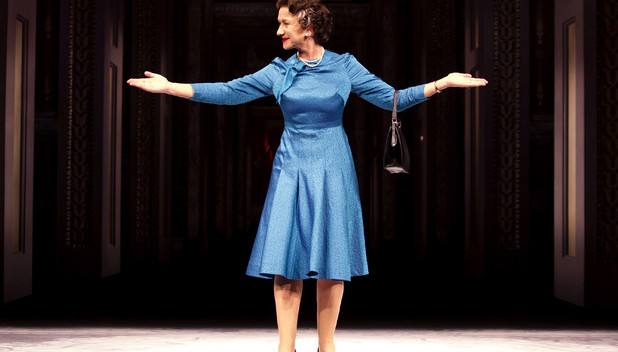 Helen Mirren is really as Queen Elizabeth II. (She’s also played Elizabeth I, mind you.) First she won an Oscar for “The Queen.” Now she’s thrown her hat in for a Tony for playing Liz in “The Audience,” directed by Stephen Daldry, written and updated by Peter Morgan. “The Audience” opened on Broadway Sunday night after a hit run in London’s West End.

Mirren could wind up being the first actress to win an Oscar and a Tony for playing the same character in different genres and different stories.

Daldry, mind you, sets a record for having plays opening in theaters next to each other– “The Audience” at the Schoenfeld and “Skylight” next door at the Golden. He could also– will also be nominated for directing each of them. “The Audience” is original, “Skylight” is a revival.

“The Audience” is much improved from its London run, a little lighter and bouncier than it had been. The changes are not purely for American audiences. The same changes go in to the new London production about to commence with Kristin Scott Thomas as The Queen.

This will be one of those productions that sets box office records, I think. Mirren is mesmerizing as she plays Queen Elizabeth from the time her father died and her first “audience” with Winston Churchill to the current PM David Cameron. The play cuts back and forth, requiring Mirren to display different textures including posture and pitch of voice. She’s done it before, but here it just seems effortless. And her costume quick changes are right up there in the record books.

Daldry and Mirren know each other so well that by now this is indeed their magic act. But kudos have to go to Judith Ivey, an unexpectedly delicious Margaret Thatcher, Dakin Matthews as Churchill. Dylan Baker gets the comedy and tragedy of John Major, and Richard McCabe is sensational as Harold Wilson, the Queen’s “favorite” PM.

What Daldry and Mirren have done is make QEII–who used to seem aloof and out of touch, enemy of Diana–sympathetic. She objected to Thatcher’s dismissal of the poor, fought with Anthony Eden over the Suez canal, and identified with Wilson’s labor instincts. Is she really an old leftie? Has she always been the friend of the little guy? Frankly, the Queen should invite Mirren and Daldry over for dinner. They’ve been her best publicists.

Lots of Broadway type guests at the swanky after party, from Michael Feinstein to Mirren’s husband Taylor Hackford, plus Tyne Daly, Walter Bobbie, Richard La Gravenese, actors from the upcoming “Wolf Hall” and so on. “Newsroom” star Emily Mortimer arrived a few minutes and she was made to stand at the rear of the orchestra for the whole first act in high, uncomfortable heels by the ushers. She didn’t complain. Director Kenny Ortega came from L.A. on crutches to see the show, and then walked the four long blocks to the party — with the crutches! That’s a good friend!

PS The Shuberts have this show, and chief honcho Phil Smith, whom everyone loves, liked it so much he came to the party. That’s when you know you have a winner!