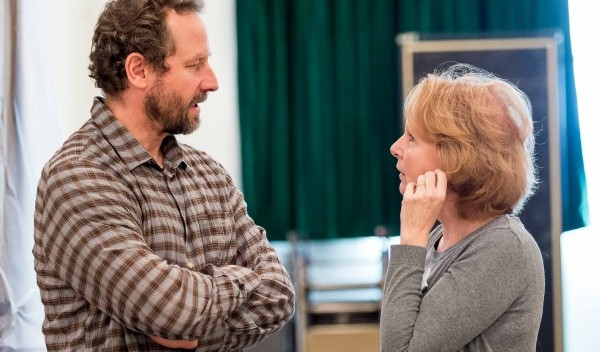 There’s nothing worse for an actor (or anybody) to have your work compared to your parents’. But it’s a thrilling coincidence that the talented adult children of Jason Robards and Lauren Bacall, and Richard Burton, are giving knockout performances this month at Los Angeles’s Mark Taper Forum. Sam Robards and Kate Burton triumph on their own in Arthur Miller’s 1967 play “The Price.”

Los Angeles theatergoers are lucky enough to still be able to catch the ‘The Price,’ which runs until March 22nd. Garry Hyne’s production is a robust, humorous and heartbreaking play. The story is about two estranged brothers, one a policeman who sacrificed his scientific career to care for their father whose life was ruined in the 1929 stock crash, the other a successful surgeon who forged ahead on his own path.

The setting is in the attic of the family brownstone in Manhattan, which is about to be torn down, filled with outdated furniture. The cast is top notch, led by the talented Robards, who gives a complex, anguished performance as Victor, the Policeman who lives in duty, regret and what could have been. The powerful Robards is on stage the entire play and is riveting.

Victor hires Solomon, delightfully played by Alan Mandell, who is an 89-year-old furniture appraiser who has seen it all and provides the wisdom needed as well as the most welcome comic relief.

The other brother, Walter, skillfully played by the polished John Bedford Lloyd, joins them and calls his brother out on his version of their checkered family history. Robards is revelatory throughout, and especially in the second act, when the dust really flies, he is superb. Miller’s ‘The Price,’ is a constant, rewarding haunting kick in the gut theatrical experience.