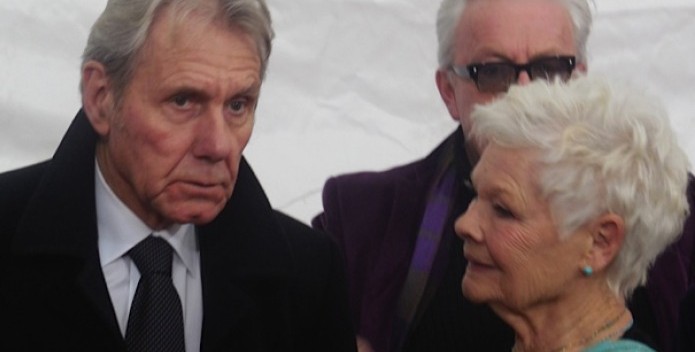 It was Dame Judi Dench to the rescue last night for the premiere of what is aptly called “The Second Best Exotic Marigold Hotel.” Dame Judi, who suffers from macular degeneration, came to New York for the premiere at the Ziegfeld even though there was rain, show, sleet and nothing to eat.

Maggie Smith and Penelope Wilton couldn’t make it because they’re shooting the new season of “Downton Abbey.” Many of the others were on stage in various places, like David Straithairn, who’s in Philadelphia doing Chekhov. (He told me so in the grocery store last week.) But Bill Nighy, Celia Imrie, and Richard Gere were there, so that made up for it. Also, the Oscar winning director John Madden, who’s always a delight to see, and Ol Parker, who wrote the screenplay for Marigold I and II.

The only celebrity outside of the cast who braved the weather was Trudie Styler, just back from visiting husband Sting on his Australian tour with Paul Simon, and a side trip to Tasmania.

Dench came with her boyfriend (he’s 71, but what do you say? manfriend?), who’s very nice and protective and is a good guide through all the crowds she must navigate. Dame Judi has not one but two films coming in 2015– “Tulip Fever,” and “Esio Trot” (which is “tortoise” spelled backwards) with Dustin Hoffman.

The problem with these sequels is that they are not stand alone movies. “Exotic” 2.0 picks up where the first stopped. The characters are all well known, and loved, so it’s not difficult jumping in with them. Madden keeps the action lively, considering the average age is 70, and finds nice moments, of course, for everyone.

Because he’s worked often with Dame Judi, you can see the two of them know what they’re doing. Dench’s yearning romance with Nighy’s character is easily the best expressed and most honest in the film. For a woman who says she can’t see, Dame Judi has the most expressive eyes in show business.

I always think that the first movie was a big hit. Internationally, yes, it made $90 million. But here in the US it was only $46 million. I suppose that will be a similar situation this time around. Ol Parker tells me this is the last installment, and I think that’s wise.

The big star of this film is India. The filmmakers have produced a travelogue that would make you think the whole country has been tidied up by a lovely housekeeper so that it resembles a spa.