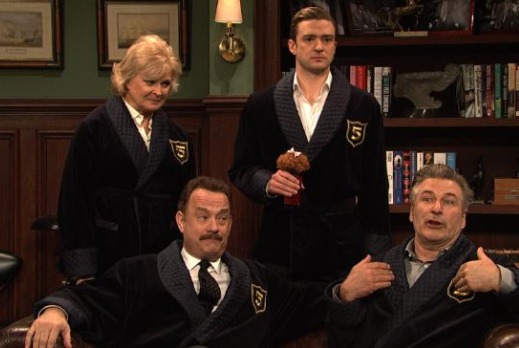 Missing: most of the Season 6 cast that was hired by producer Jean Doumanian and then fired at the end of the season. That would be Denny Dillon, Gilbert Gottfried, Gail Matthius, Ann Risley and of course, the deceased Charles Rocket. Rocket was famous for uttering the “f” word in skit, and the whole show was shut down for a month. Doumanian left, and all that remained was Piscopo and Eddie Murphy (who joined in Doumanian’s 4th episode).

Also missing of course: Dennis Miller and Victoria Jackson. And US Senator Al Franken, who was there from the beginning.

Wiped from history: Robin Duke, Mary Gross, Tim Kazurinsky. Then of course Robert Downey Jr., who had one bad season. And Julia Louis Dreyfus. Whatever happened to her? Also missing from her seasons: Brad Hall (whom she married) and Gary Kroeger. Anyone remember Tony Rosato? A. Whitney Brown? Terry Sweeney?

Tony winner Christine Ebersole was once a regular. No sign of her. Glaring omission: Nora Dunn, who was a very strong utility player, was one of the Sweeney Sisters with the late Jan Hooks. She fought with Lorne Michaels over Andrew Dice Clay hosting the show. It became a cause celebre, and she was out after five years.

Everyone’s been asking about Cheri Oteri. She was in the audience and on the red carpet with her “date,” NSync singer Lance Bass. He was part of a made up tabloid landslide all week that NSync would reunite on the show. Why? Does someone want them to? Certainly not Justin Timberlake. Or me.

Also interesting: no sign of Brian Doyle Murray, Bill’s brother, who was a regular and seemingly always around the show. And Robert Smigel, of Triumph the Insult Comic Dog fame and maker of many videos.

Plus, Candice Bergen was allowed only to introduce Miley Cyrus.

Did I miss anyone? Let me know.